25 fabulous minutes of North by Northwest features railroad-related goodness including Grand Central Terminal in New York City, a ride up the Hudson River onboard the Century, dinner in the diner, and a train-to-waiting room tour of LaSalle Street Station.

Add to the mix Cary Grant (as Roger Thornhill) and Eva Marie Saint (as Eve Kendall) and you’ve got romance, suspense and intrigue galore. So, Watch Your Step and Welcome Aboard!

“Tell me, what do you do besides lure men to their doom on the 20th Century?”

As Roger Thornhill fondles his Gibson, Eve Kendall (Rahr-RAHR!) coolly appraises the handsome gent in the horn-rimmed Ray-Bans. Sparks are sure to fly in car 3901, Drawing Room E!

END_OF_DOCUMENT_TOKEN_TO_BE_REPLACED 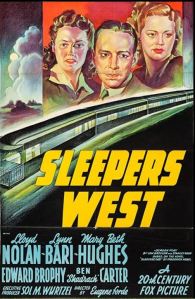 What could be more fun than a Fox “B” picture mostly taking place on a train? Private dick Michael Shayne (played by Lloyd Nolan) is transporting a surprise witness to a trial in San Francisco. Along the way, Shayne has to sort through plenty of onboard suspects who would like him (and his incognito witness) to not reach the courtroom.

If this plot sounds familiar, it was reused at least twice in 1952’s The Narrow Margin and 1990’s Narrow Margin.

Most of the onboard action takes place on sets, but there’s plenty of live train scenes including use of a Santa Fe Railway locomotive and depot location I could actually identify.

Even a “B” picture can have great, detailed scenes if you’ve got access to 20th Century Fox’s resources. Marble ticket counter, chandeliers, neon signs and arched track gates.

Can you spot the one little error in the train departure board? On most railroads, Denver to San Francisco would be considered westbound and thus the train should have an odd number. As an Amtrak conductor once said, “The odds go to San Francisco”.