Wow! This obscure, little gem is just PACKED with railroad action. While many/most of the early B&W movies I have reviewed (such as Murder in the Private Car 1934 and The Block Signal 1926) were filmed on Southern Pacific or Santa Fe rails, Webs of Steel was filmed mostly, if not entirely on Union Pacific Railroad (UP) in the Los Angeles area.

More specifically, we are treated to a whole slew of oil-burning, beefy 2-8-0 Class C-57’s, lettered for UP subsidiary LA&SL (Los Angeles & Salt Lake).

The heroine of this silent flick is the plucky Helen Webb (played by Helen Holmes). Actress Holmes came from a railroad family and did all of her own stunts in this movie as well as a string of other railroad-related pictures. 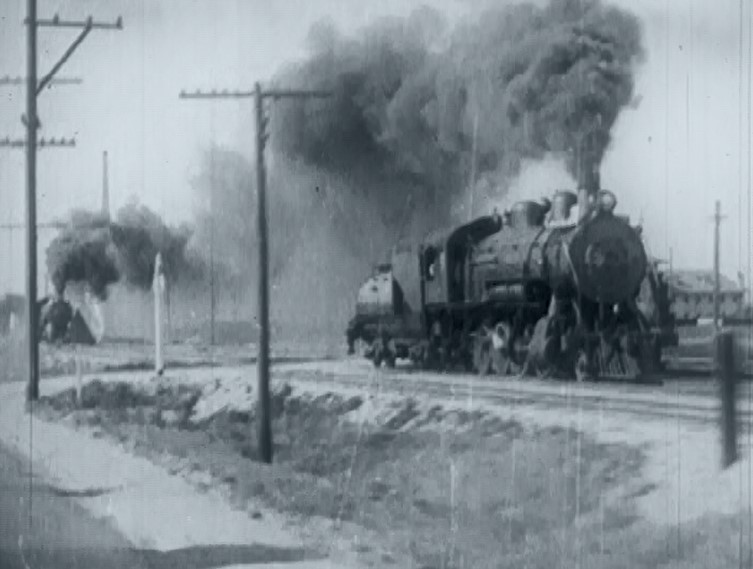 Two UP 6000 series 2-8-0’s are blasting along during the elopement scene. Helen and her beau (the engineer) are trying to stay ahead of the second 2-8-0 bearing her father — who does not approve of this joining! Sparks are sure to fly (groan…) when Dad catches up with them. 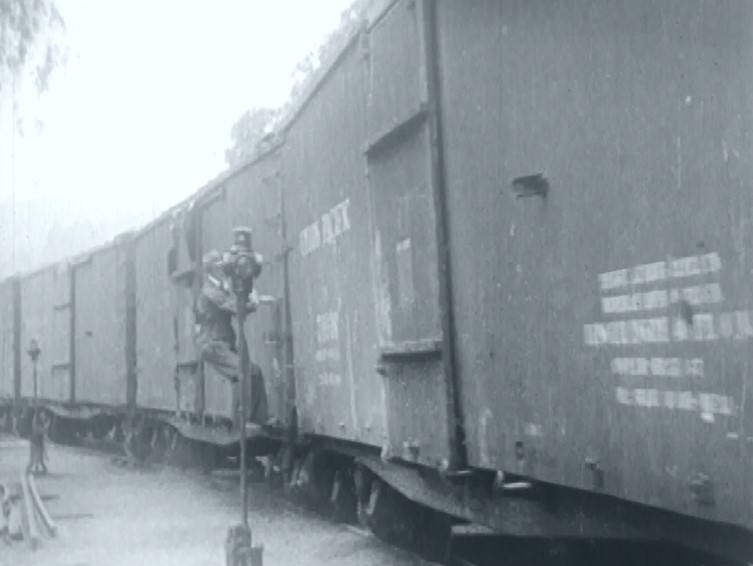 Union Pacific X6044 rounds the corner passing the Webb family homestead. The 2-8-0 was built by Baldwin in February 1907. Helen’s Dad, Tim Webb (played by Andrew Waldron) climbs the locomotive’s steps and waves goodbye to his daughter. Good views of a high switch lantern and some ancient wooden box cars as the train leaves town. 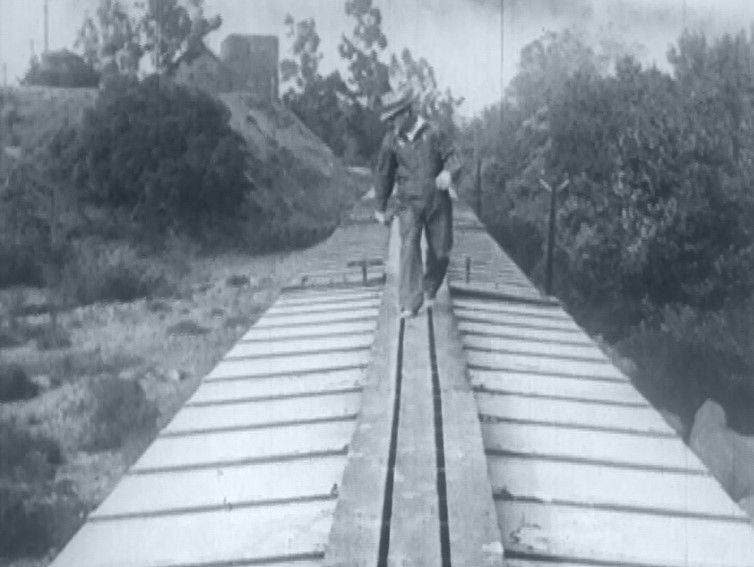 Meanwhile, the Cannonball Freight is trundling along with Hobo John Andrews (played by Bruce Gordon) trying to escape “from a shadow that clouded his name”. Unfortunately for John, he is spotted by a brakeman “decorating the car tops” who unceremoniously ejects him from the train.

Hunk of the movie left off HERE.

Two good shots of Helen driving her flivver. First, we get a view of the UP roundhouse and turntable with a nice assortment of steam locomotives; Second, Helen visits Dad (Tim Webb, the Division Superintendent) at headquarters. That’s LA&SL #6052 beside the building (Baldwin built October 1907 2-8-0).

Helen is getting mighty chummy with John (who helped her out of an earlier scrape) MUCH to the displeasure of Master Mechanic Jim Haggerty BOOO!! (played by Arthur Morrison) who also has eyes for Helen. In the second view (behind Jim) is a different vista of the roundhouse including #2106, a little 0-6-0 switcher with slope-back tender. 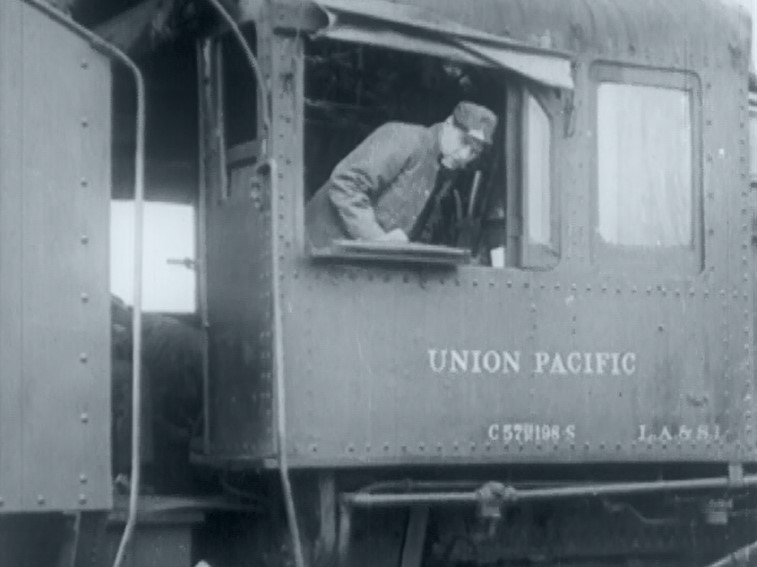 Jealous Jim sends John out with LA&SL #6044 (Baldwin built February 1907 2-8-0)…which has bad order air brake pumps! That’s one way to get rid of your rival. Fairly clear view of all the lettering on the cab side in the second shot.

Rounding a curve, John (to his horror), comes upon a little girl trying to free her dog from a trestle. That’s Helen trying to get the kid off the bridge. 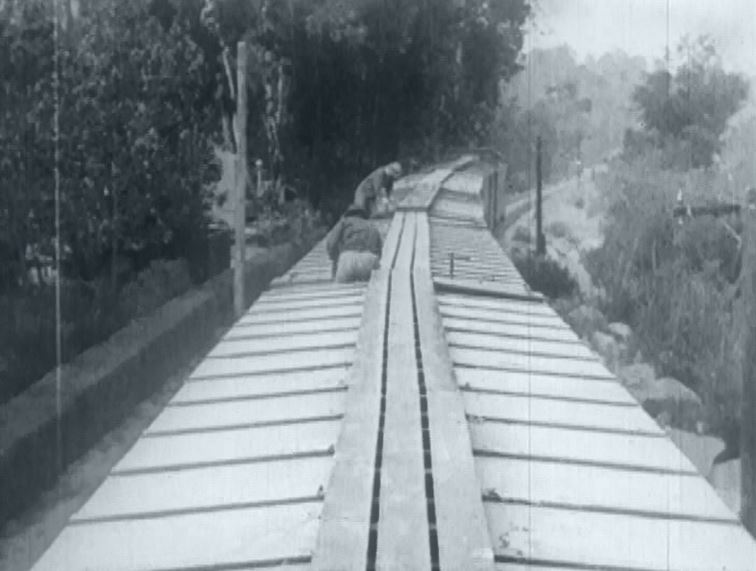 John whistles for brakes, but there isn’t time for the brakeman to react as the 2-8-0 bears down on the unlucky trio.

Helen to the rescue! Hanging onto a bridge tie, she dangles precariously as the entire train passes overhead. 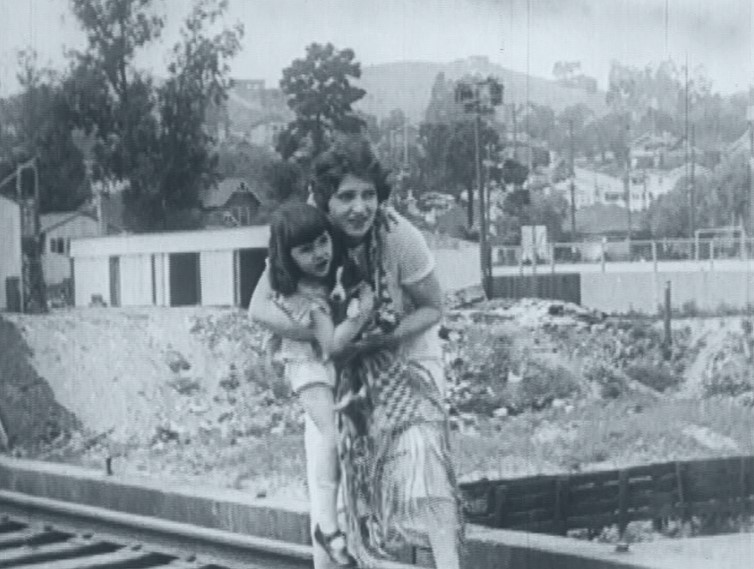 Great view of UP caboose #2876. Helen, the little girl and puppy are safe! John explains he couldn’t stop because the air pump had broken down. The little girl’s father tells Helen “You saved my baby and I won’t forget it”.

Another chunk of non-railroad mushy stuff left off HERE. 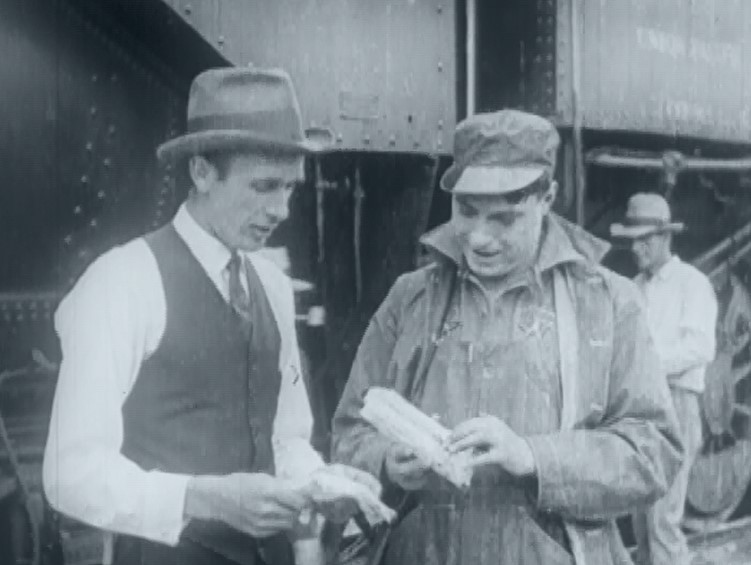 The next morning, a dejected Helen (looking fabulous in her full-length, leopard skin fur coat), is being taken away on The Limited by dear old Dad. Meanwhile, John gets his orders. He is to run light engine (LA&SL #6053 Baldwin October 1907 2-8-0) ahead of The Limited to Fillmore.

Nice view of old, wooden passenger equipment. Notice how the one coach is kind of arched up in the middle.

Engineer John mounts up and sets off in the 6053 for Fillmore. What’s this? Helen is streaking across the railyard and is helped up the gangway by John as the astonished father and the eeevil Jim Haggerty look on.

Not to be outdone, Division Sup Dad and Jim Boy run over to the LA&SL #6055 (Baldwin October 1907 2-8-0) conveniently steamed up and flying white extra flags on the next track. Soon they are riding the footboards and in pursuit of the 6053. 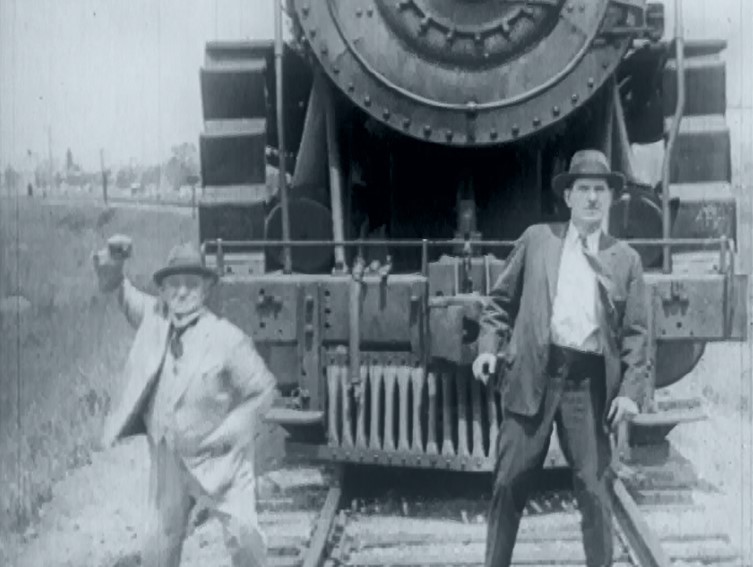 Check those funky lower quadrant signals at the junction, as John/Helen have a clear signal through the interlocking.

Dangnabbit! Super Dad hollers and gestures at the towerman to clear the track ahead. Interesting look at the interlocking tower and train order signal (set at stop, both directions).

Finally, #6055 has a clear board and blasts off. Helen looks back from the gangway (having shed the fancy coat) as John keeps his eyes on the track ahead. 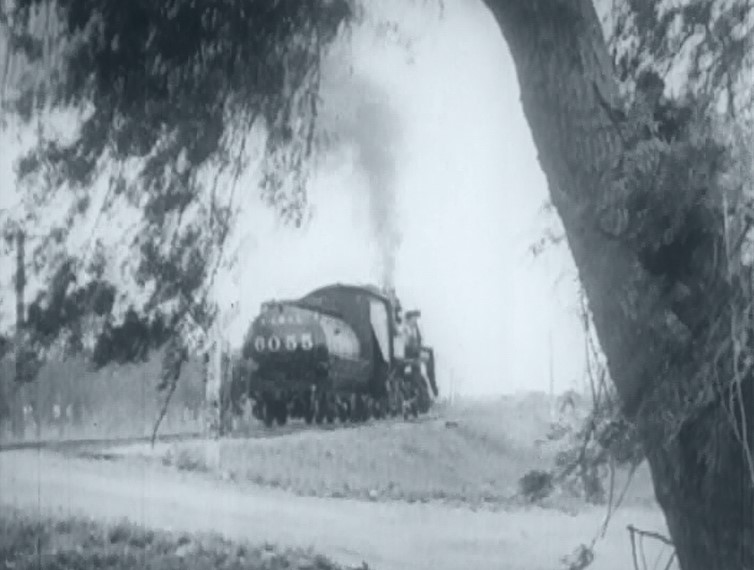 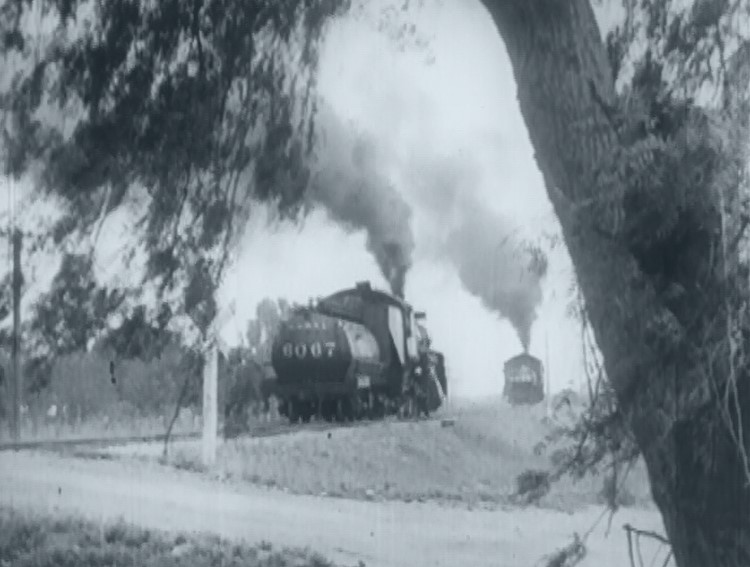 Dad’s getting too close for comfort. John/Helen put oil on the rails causing 6067 to slip its drivers. Once more, father roars his frustration as those crazy kids have a good laugh. Ha-ha! 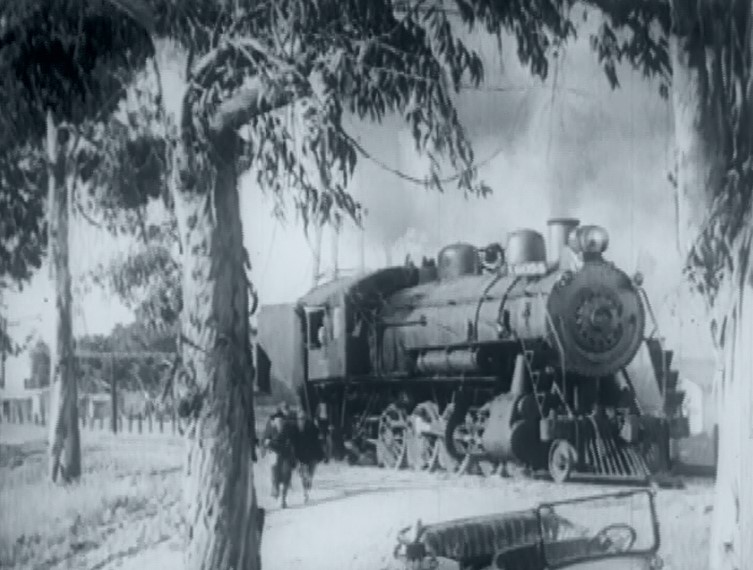 If you haven’t noticed, this is the elopement scene mentioned previously, with Helen having arranged a minister trackside for a quickie marriage. “I now pronounce you, Engineer and Wife.” 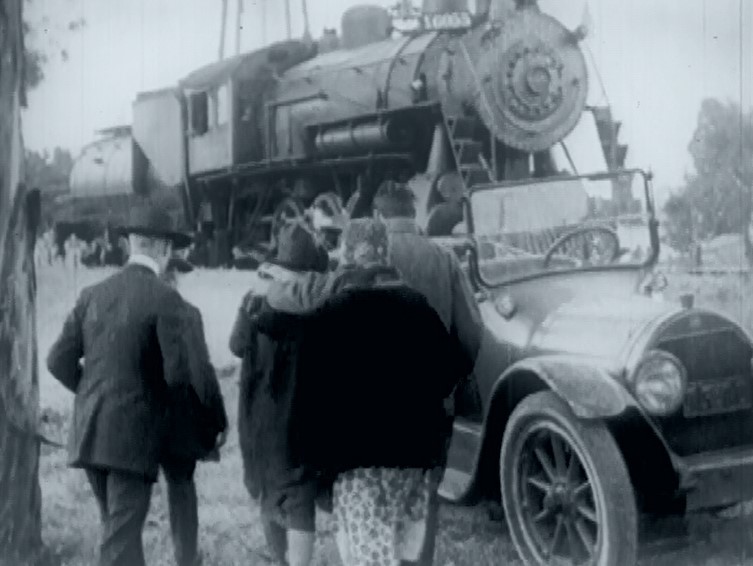 Desperately, Helen’s Dad requisitions a handcar and soon he and Haggarty are pumping along — Alas, too late to stop the wedding. 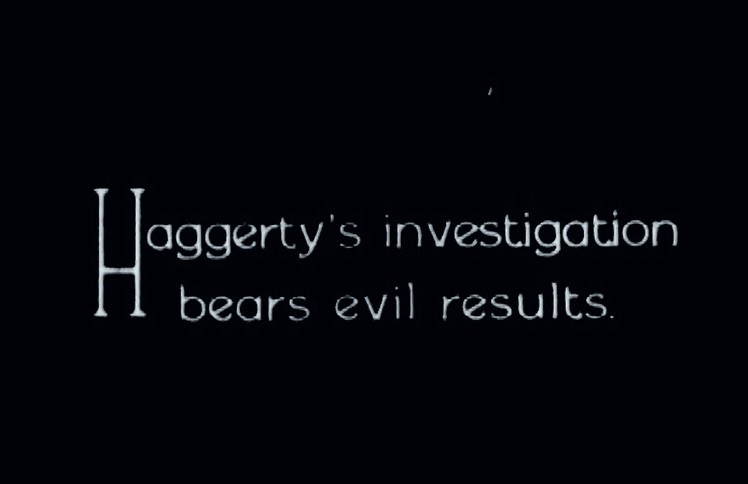 Uh-oh. Jilted Jim has hit the jackpot getting the junk on John, causing him to be jettisoned (fired). Bastard.

But all is not lost. It turns out the accident was someone ELSE’S fault, but old John got the blame. Filmmakers even took the trouble to film the incident (in flashback). Check it out… 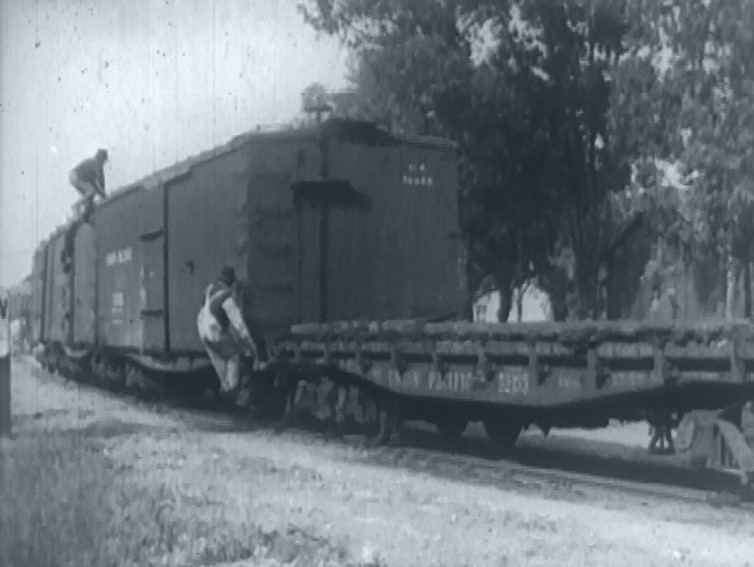 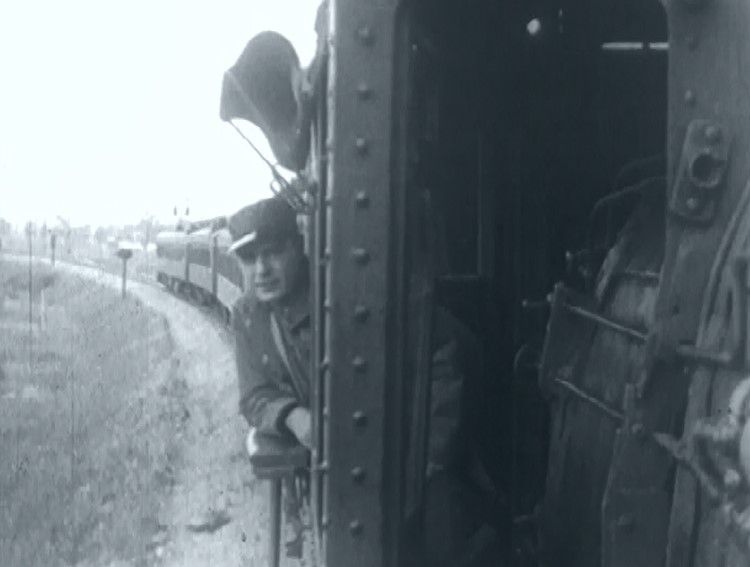 Meanwhile, here comes passenger train #3, who plows into some of the freight cars left on the main track, reducing them to kindling. End flashback.

Armed with this revelation, Helen sets off in her flivver after John, who has left town on #9. 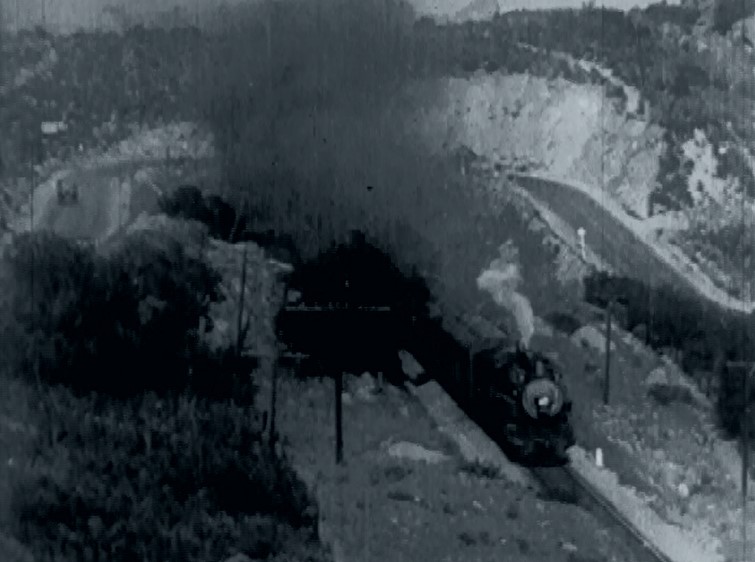 I would love to know where this location is (maybe it has since been daylighted), where the road crosses a tunnel portal on a horseshoe curve. You can just make out Helen in her car chasing the train. 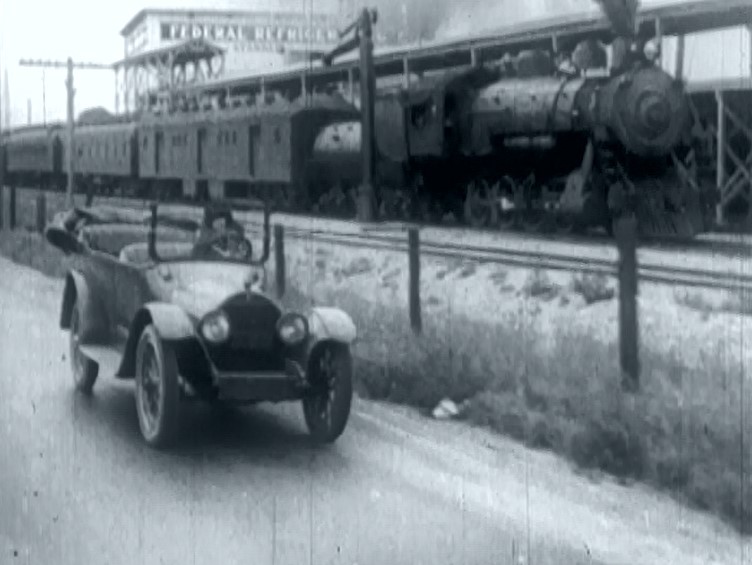 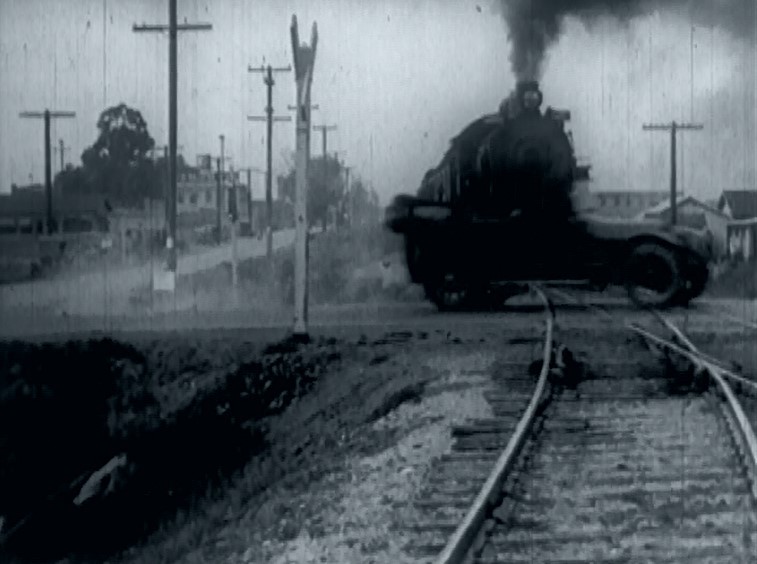 Pulling alongside, Helen is overtaking the train. Is that an odd-looking 3 door baggage car, or what?; Oochie Wig-Wag crossing signal. Stop! Look out!; Whoa! Thill-seeker Helen JUST misses getting T-boned by the onrushing express. Safety Last. 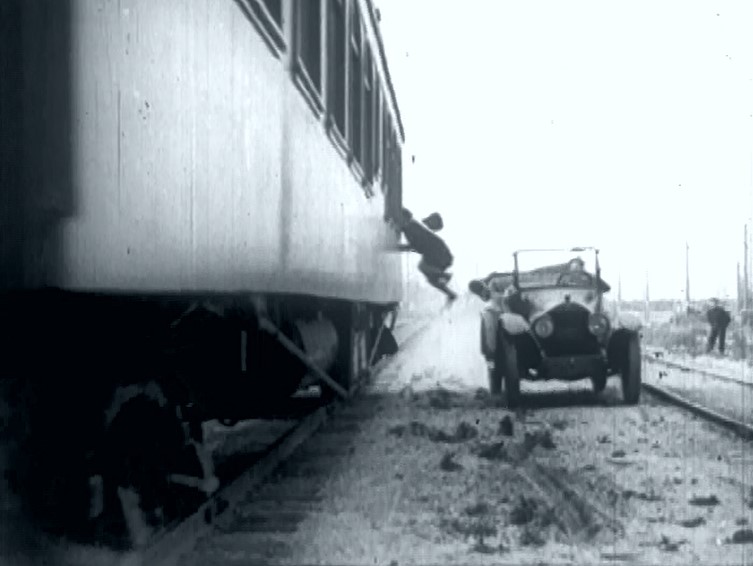 Coming alongside, Helen sets up for the final stunt of the movie…boarding the train from a moving car, while keeping her hat on in the breeze!; Oh, darling, I just had to see you. Father says it’s all right! You weren’t to blame!

Spooning in the observation car afterwards — and they lived happily ever after!

Epilogue: WordPress messed with the global settings (Highlight feature) again. I change color of plain text or link, save my work, go back in and I get a block YELLOW highlight. So, apologizes for the lack of color. W.P. just couldn’t leave well enough alone. I will continue to research for a fix.