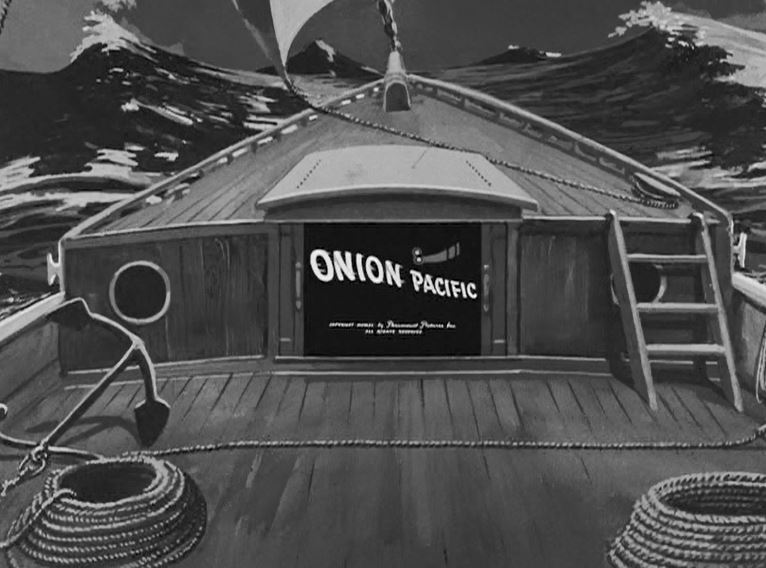 It’s Popeye the Sailor (voiced by Jack Mercer) vs. Bluto (voiced by Pinto Colvig) in this 1940 cartoon send up of Paramount’s own epic movie Union Pacific 1939. In this black and white animation, it’s a race side by side on double track to win the state franchise (presumably to operate the railroad). Two steam engines (Bluto runs a 6-4-0, Popeye a 4-2-0) have to contend with choke points like a single track bridge and single track tunnel.

Being a cartoon allows many over-the-top gags and mishaps you simply could not do with real actors. Compared to a Warner Brothers Looney Tunes, the animation is not that great, but it’s fast with lots of action. I was able to review this picture from my Popeye The Sailor 1938-1940 DVD.

Now sit back and enjoy this train-laden feature from the early days of animation! 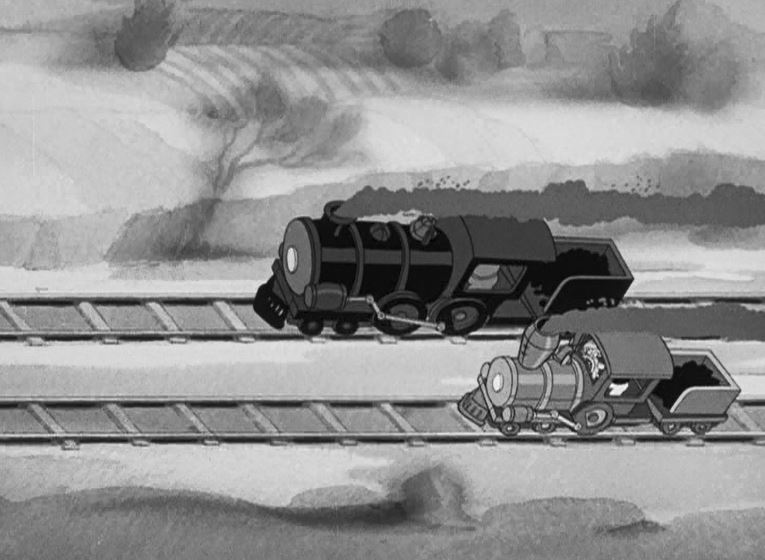 This sequence gets reused quite a bit as for much of the race, the two combatants are side by side, constantly trading the lead with each other. Notice animators left off one set of pilot wheels on Bluto’s locomotive making it a 4-4-0. 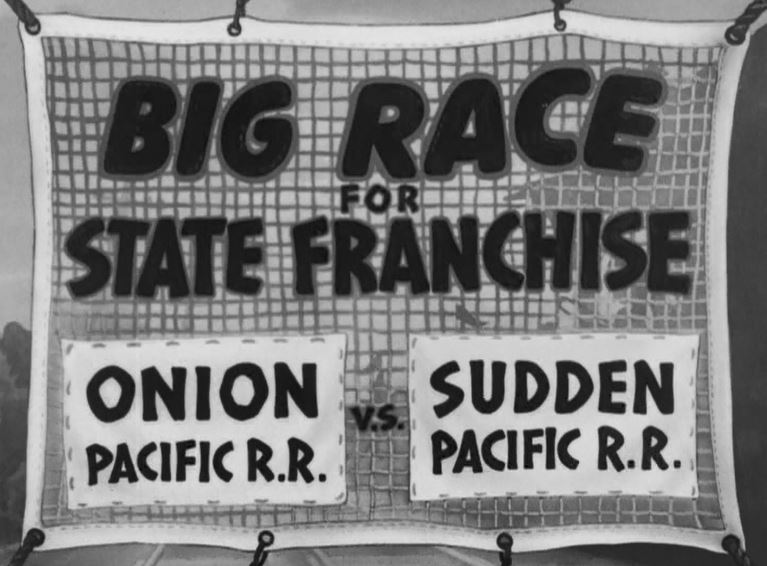 With pennants waving in the background, the Big Race is played up like a college football game; Representing the Onion Pacific is Popeye in his decrepit 4-2-0 and running for the Sudden Pacific is Bluto in his much more hefty 6-4-0. 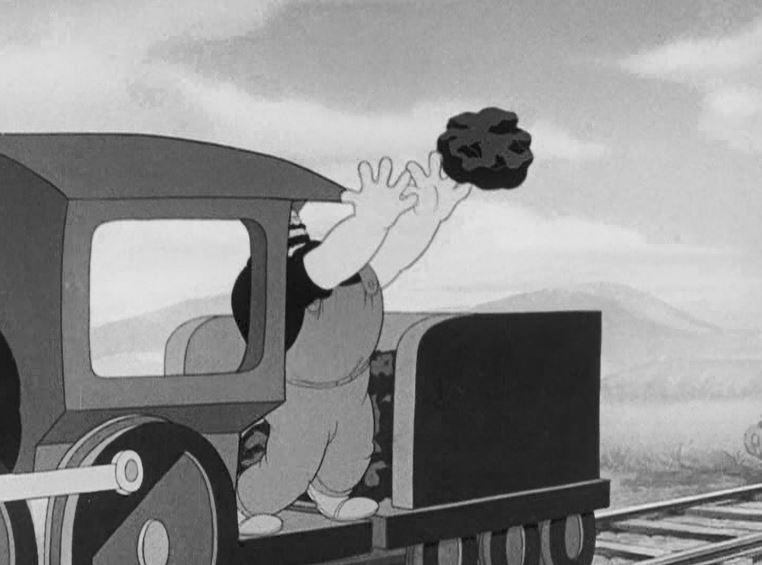 Just before the starter’s gun is fired, Bluto heaves a chunk of coal to clog Popeye’s smokestack. This causes all sorts of problems for the ramshackle 4-2-0. 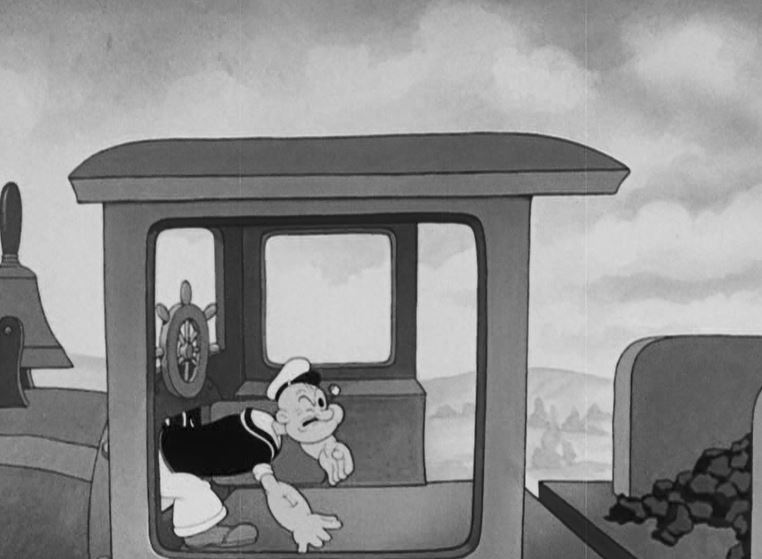 As Bluto takes the lead, Popeye walks through the blazing firebox, punches the coal skyward, comes back out and neatly catches it on his shovel. Note the wooden ship’s wheel in the cab…as if you could steer going down a set of tracks. 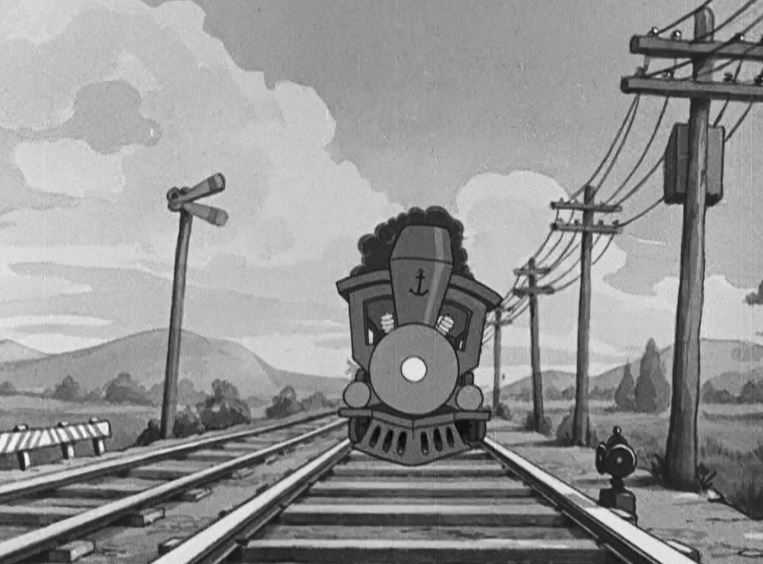 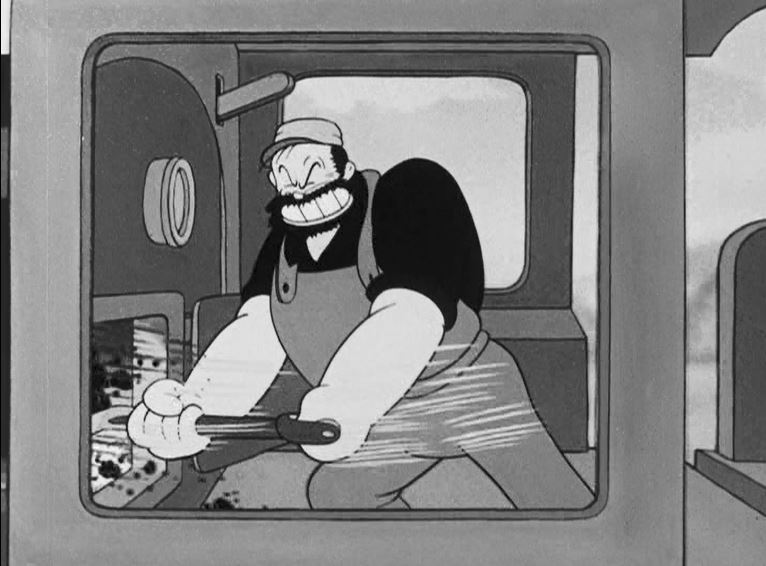 Now rarin’ to go, Popeye’s 4-2-0 rears up on its haunches and races down the track in pursuit. Trying to stay ahead, Bluto is shoveling more coal and finally gets a shovelful of Olive Oyl! (voiced by Margie Hines)

The two steam engines race along side by side. Uh-oh. A single track tunnel with Bluto just squeezing in front…yet when they emerge, Popeye is back in the lead! Go figure… 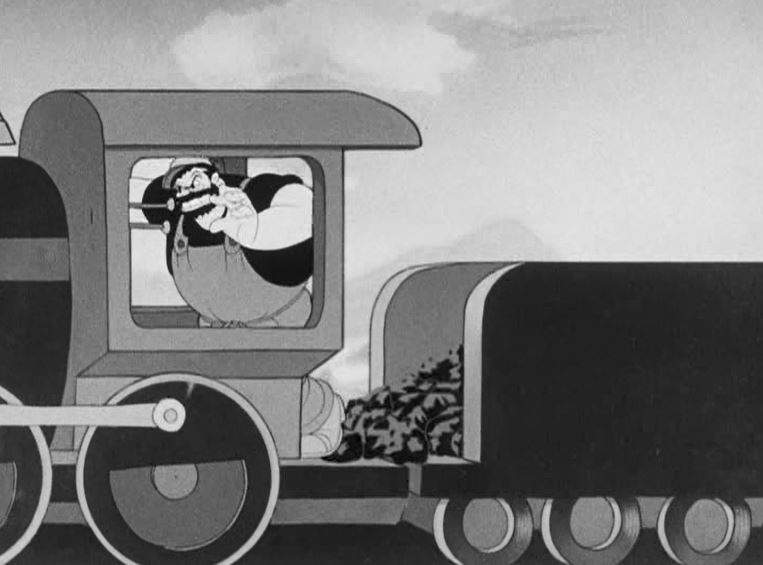 Popeye is smugly steering his ship along whilst Bluto pulls these odd-looking levers to catch up. 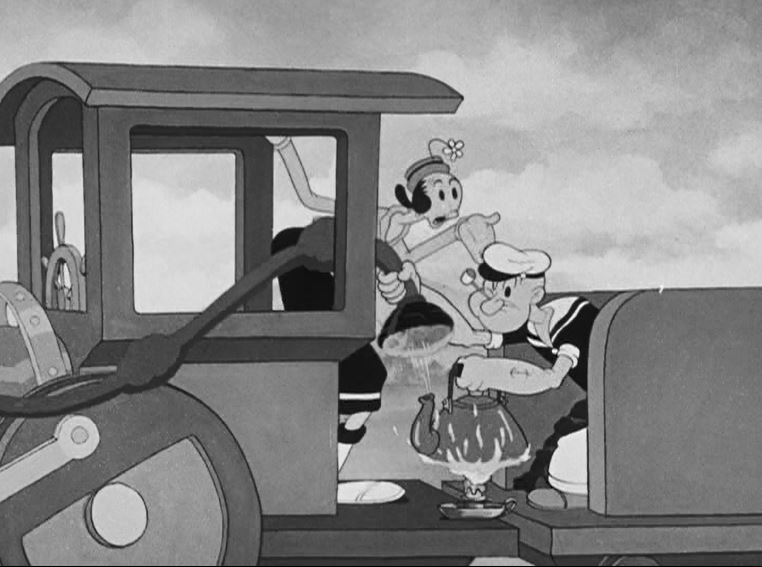 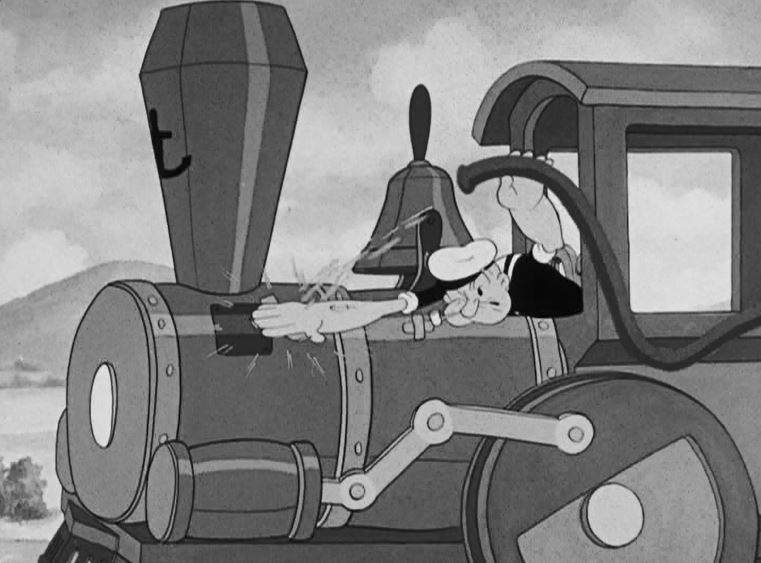 More sabotage. Bluto busts a hole in Popeye’s boiler with a pickaxe. With a blowtorch candle, Popeye heats some water in a kettle, sending gobs of steam into the boiler which he quickly patches with a band-aid. 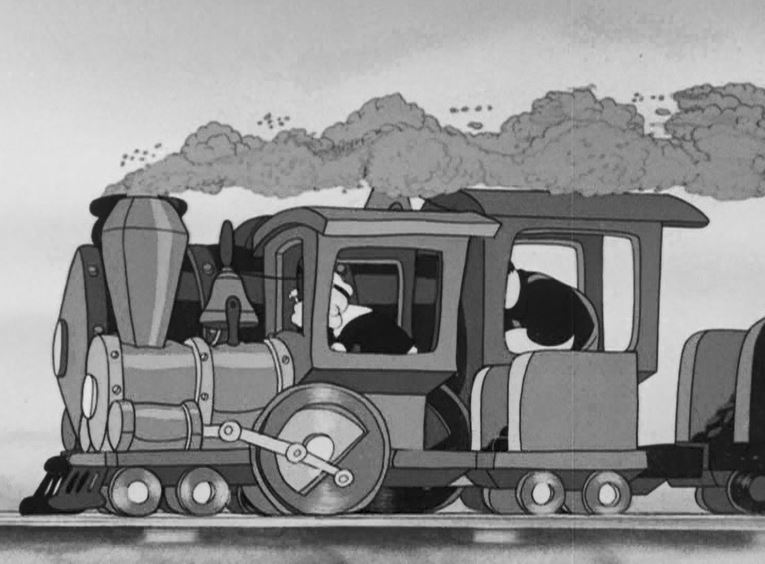 These are the two best views in the cartoon of the two locomotives in profile.

Single track trestle means one at a time, right? Of course not. Using Olive Oyl as a span, each combatant uses ONE rail to cross the bridge. Begorrah! 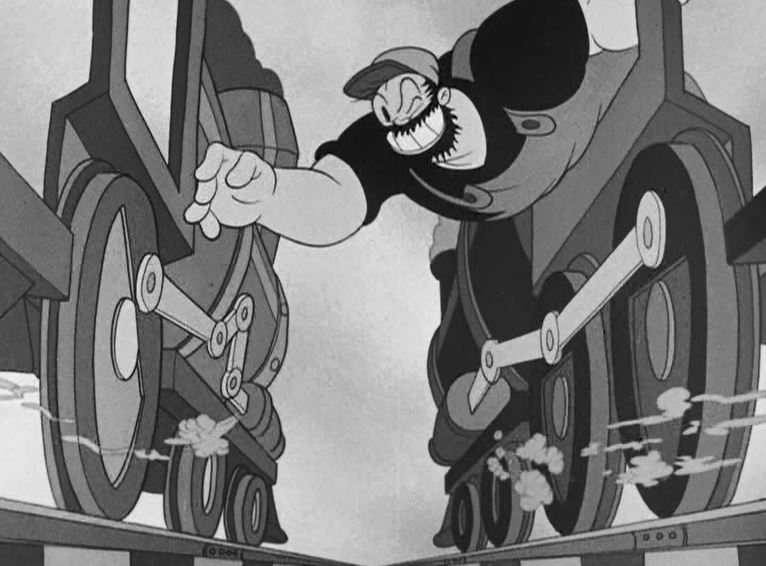 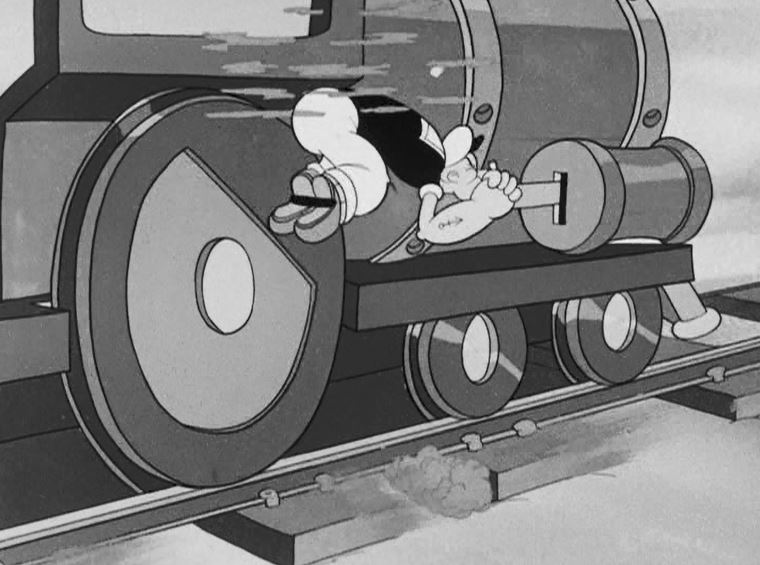 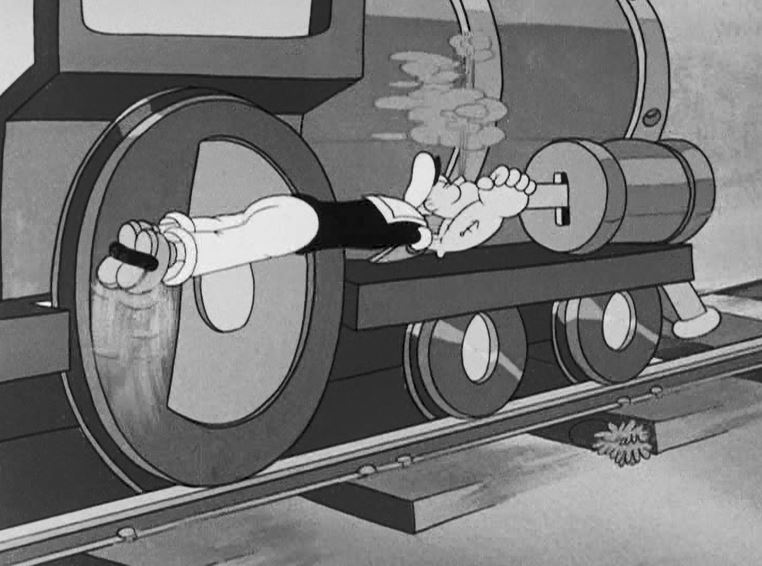 The treachery continues. Bluto manages to pull the driver off the side of Popeye’s locomotive, but the ever-resourceful sailor man uses his body as a replacement. 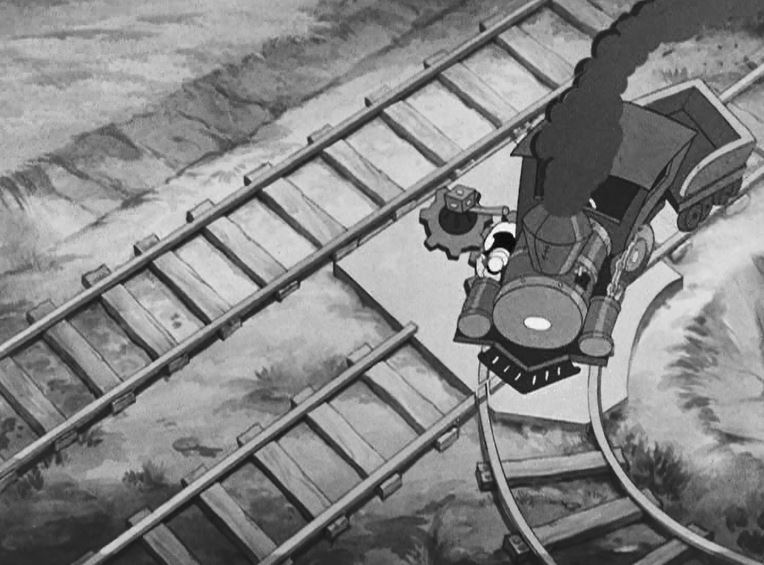 Bluto throws a switch sending the 4-2-0 onto a side track where it explodes on contact with the bumper post and water tower. In the last image take a look at Popeye and Olive flying through the air as the locomotive disintegrates. 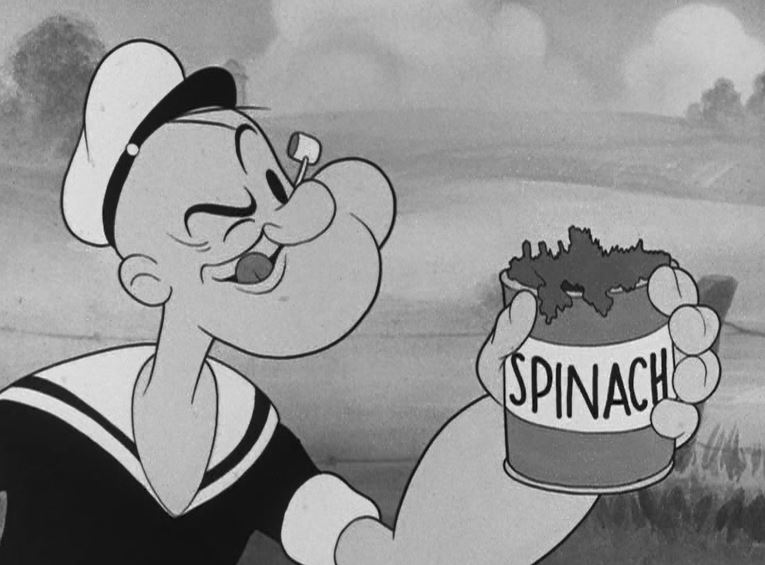 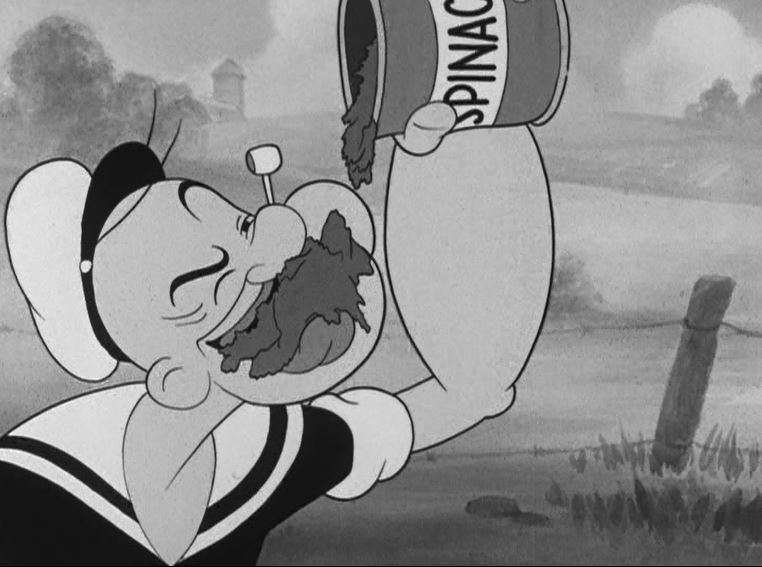 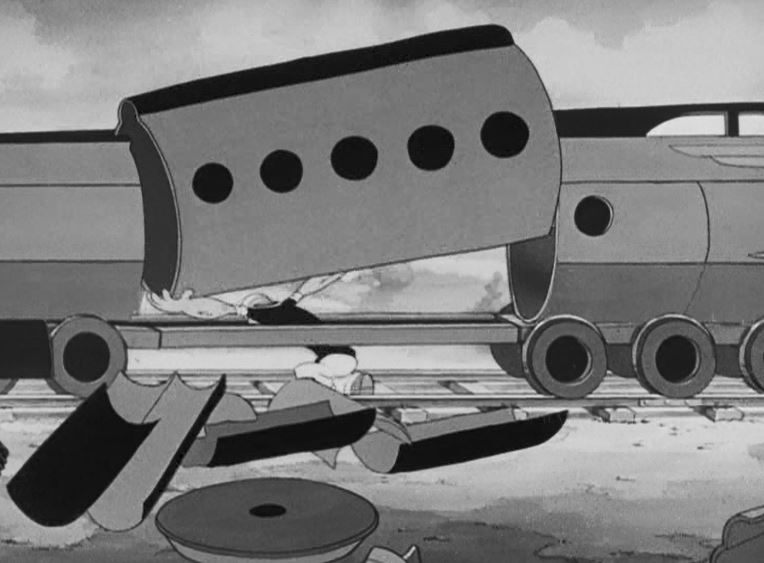 From the junk of his expired 4-2-0, the sailor man re-assembles the wreckage into a super, streamlined passenger train!

As Bluto enjoys a cigar and chortles in triumph, Popeye backs his streamliner onto the mainline. 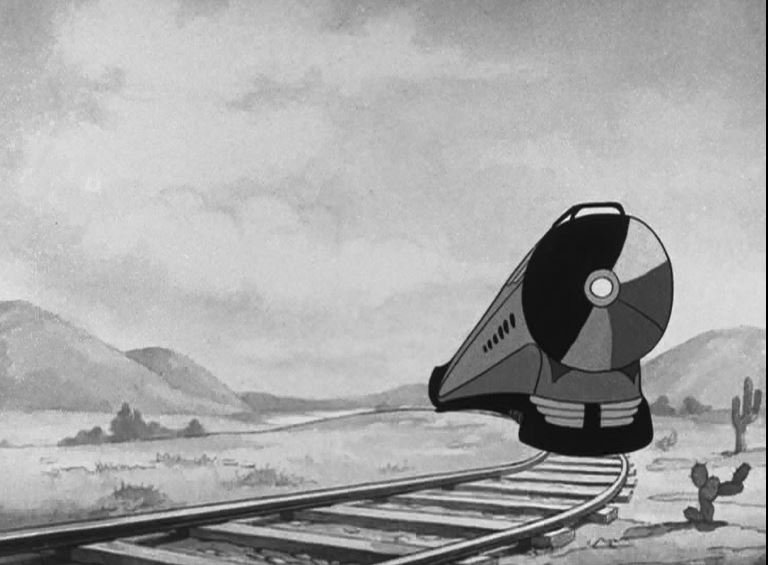 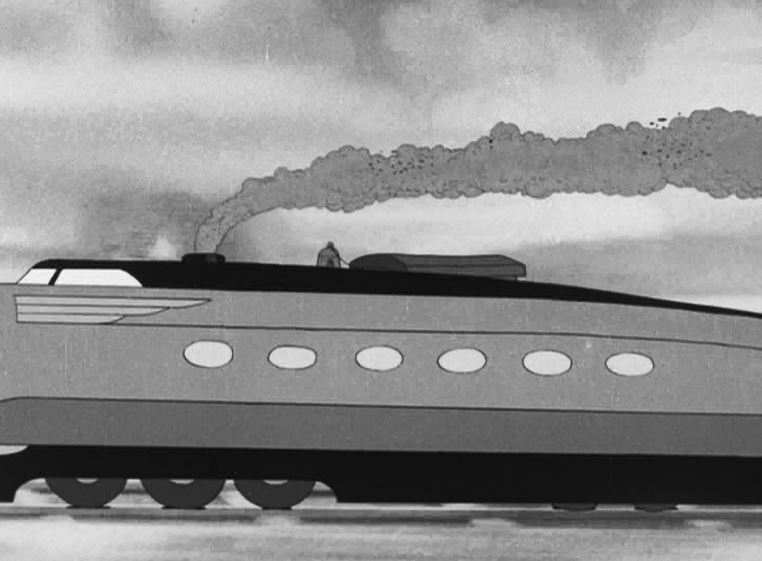 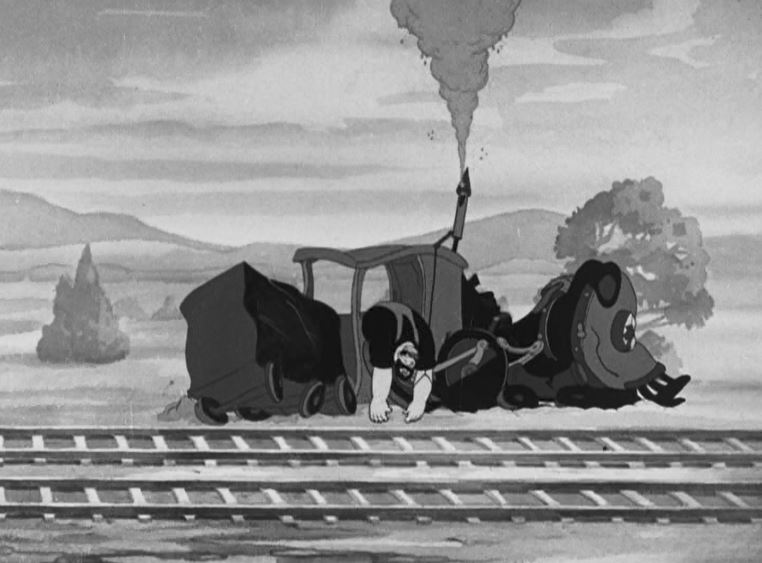 After the spinach rebuild, Popeye’s train looks very much like the sleek contraption in Porky’s Railroad 1937, although we never do get a complete side view of the streamliner.

The streamliner passes Bluto’s 6-4-0 so fast, it blows the locomotive apart, leaving his rival in a heap. 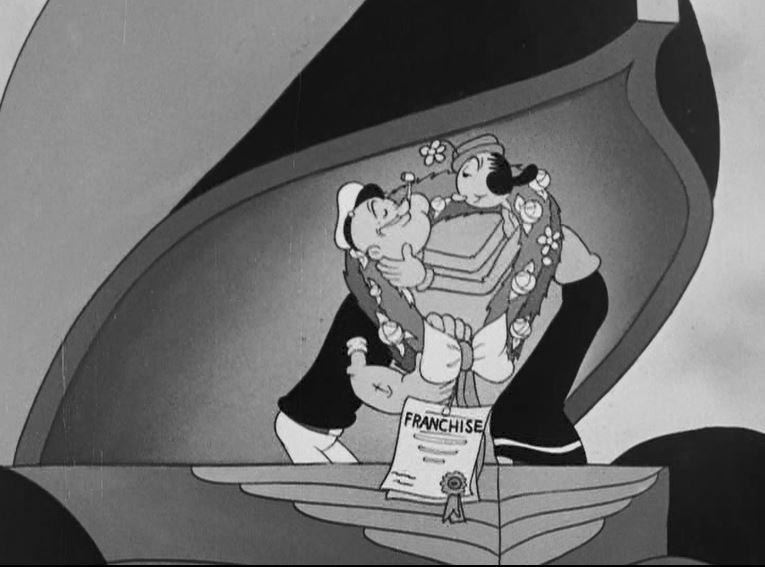 Of course Popeye wins the race, the franchise and a kiss from Olive Oyl.