Batman! When I was a wee lad, this was the hottest show on T.V. Mind you, we didn’t have a color TV set yet, and most of the campy humor and famous guest stars went right over my head. It wasn’t until I was an adult, that I could watch the DVD’s and really appreciate all this series had to offer.

There’s not much in the train department of this episode, but with a title like that, I just couldn’t pass up a quick review. Besides, this 3rd season episode included Batgirl (played by Yvonne Craig — rahr-RAHR!). Fair reader, consider it your Christmas bonus.

In this second episode of a two-parter, Batman (played by Adam West) and Robin (played by Burt Ward) are battling Shame (a parody of Shane) and his gang, whose plans include robbing a train of a large sum of legal tender.

As stated previously, because the railroad optics are so thin, I’m going to include some colorful Batman classic scenes. It’ll be fun!

The only actual railroad scene (from archival footage) is this brief clip of a Southern Pacific mail, express, and passenger train seen here. More details about this clip later on, including a guess as to which train it might actually be.

The Wolfman, Joker and Penguin are no match for the Dynamic Duo!

For the 3rd season credits, Batgirl was added in and…she sneaks a peak at the camera, as she rides by. 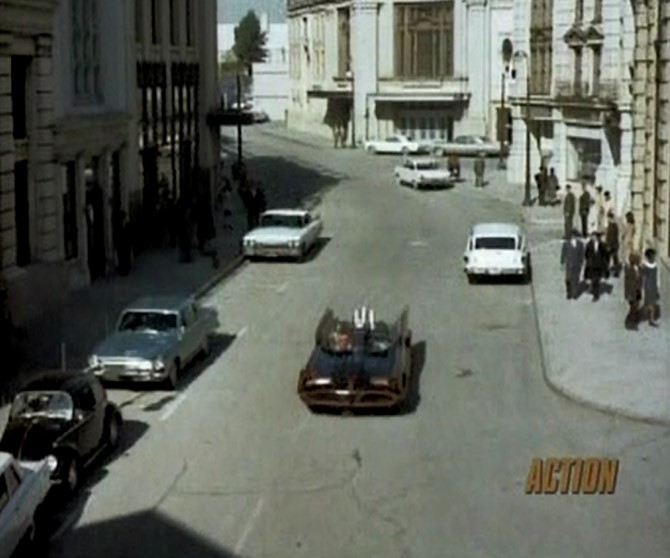 I always thought the Batmobile was so cool. I had a Corgi toy Batmobile as a youngster that had a flame exhaust, rocket launcher and chain chopper…all features that eventually broke from hard play. ;p

My inestimable car-geek brother, Mark, has graciously identified the police cruiser parked in FRONT of the Batmobile as a 1965 Plymouth. Thanks, Big Brother! And I WANT that enormous roof siren/red light. :>

Check the above link for everything you ever wanted to know about the Batmobile. Fascinating reading.

Pow! Every episode seemed to feature a fight scene. All actors involved made sure to ham it up to the max. In this one, Batman does some great Judo chops, whist Robin and Batgirl rely on flying leg kicks. 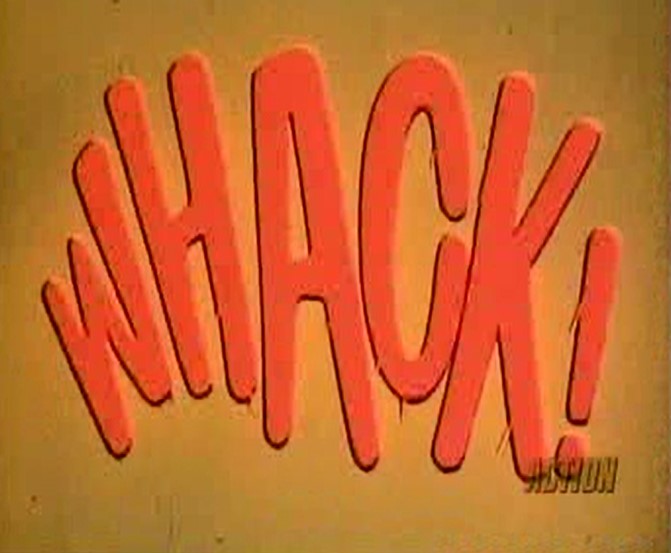 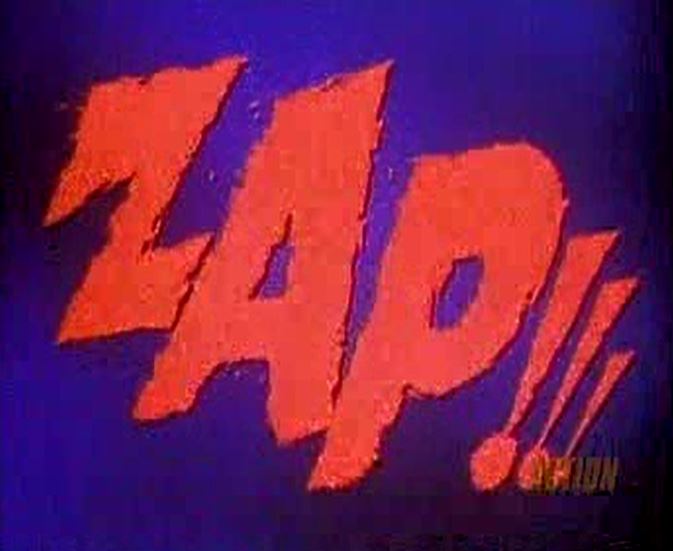 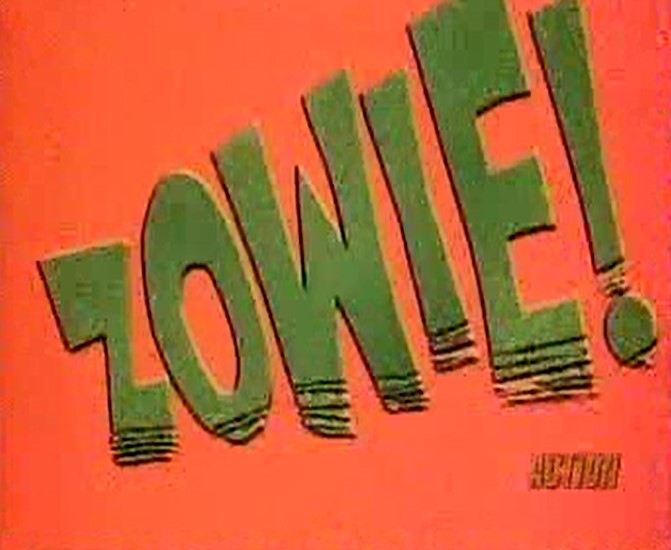 Batman on TV in 1968 meant color, and they used every shade of it in the Bat Fight action cards.

Okay. Enough self-indulgence. On with the train scenes. Batman has learned that Shame (played by Cliff Robertson) and his gang plan to hold up a train carrying “old money being sent to the Treasury Department to be destroyed”. 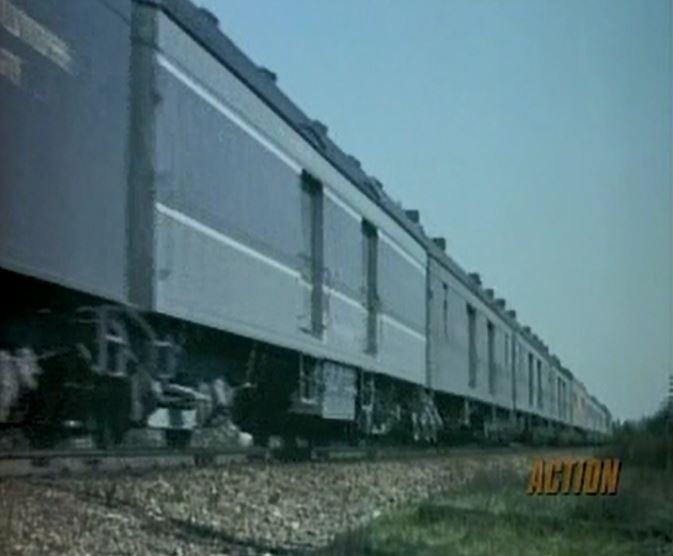 So from the brief clips of this Espee train I can deduce the following consist:

Following the storage-mail/RPO/express/baggage portion of the train are at least 5-6 passenger cars (coaches and possibly a sleeper and dining car). Can’t tell too much from this angle.

Compare the Batman money train with the above two pictures of Southern Pacific’s train #5 (note the train indicator boards) which was the New Orleans to Los Angeles “Argonaut”, according to my August 1955 Official Guide. These pictures are from my review of White Christmas 1954.

Southern Pacific Railroad had LOTS of mail trains, so this is just conjecture on my part. 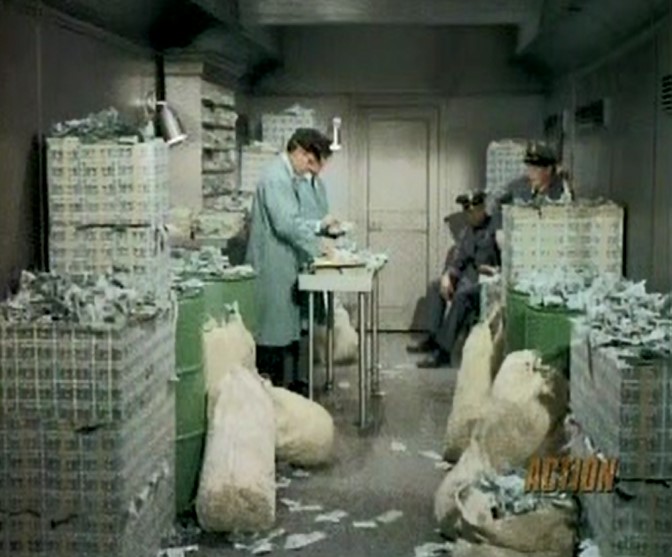 “This is my first ride on the money train. You get kinda nervous with all this cash laying around.” I like how the bills are just scattered haphazardly about the baggage car set. 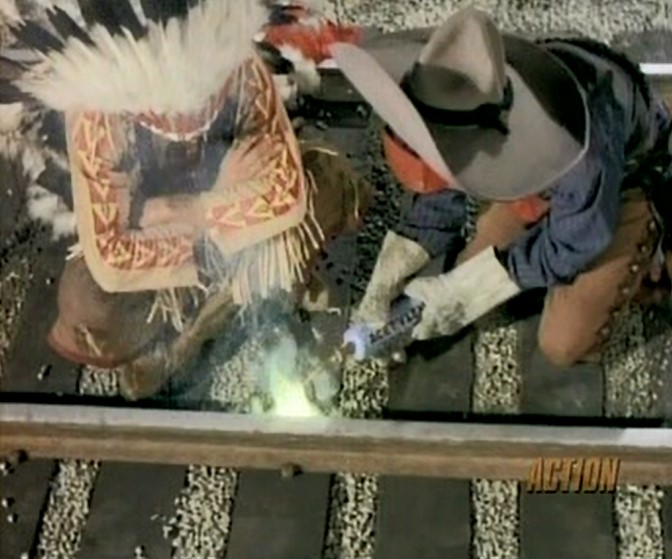 “Nothing to worry about. I make this same trip at the same time every month.” (The yawning guard is not impressed.) “You know, they’d have to sever the rails with an acetylene torch to even slow it down.” Of course, we then see Shane’s gang doing just that. 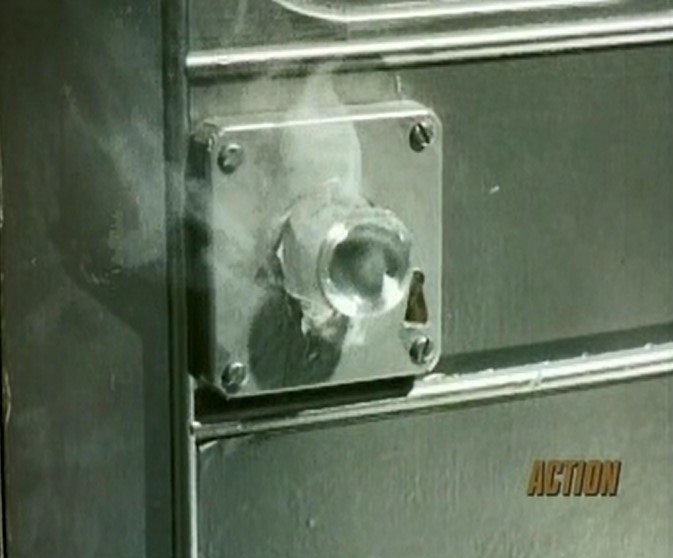 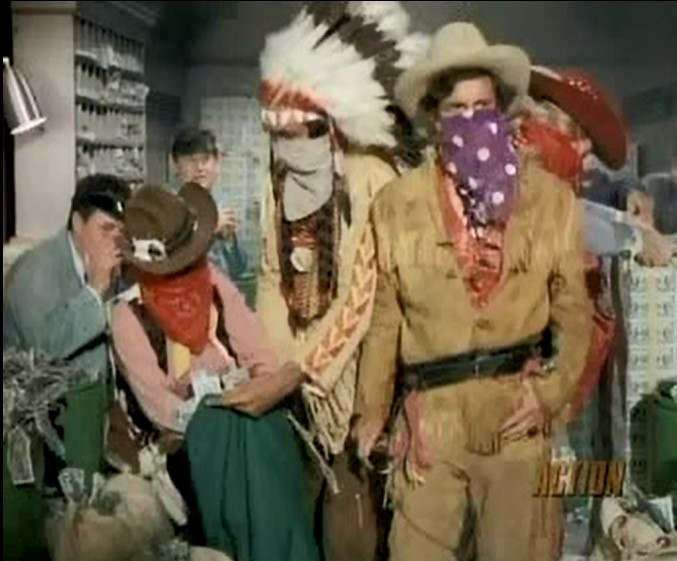 “This car is made out of 3 inch armor plate. Nothing can crack it. With the possible exception of a 283 carat diamond drill.” Such precise size. Not 282 nor 284 carat.

Having gained access to the compartment, Shane tosses in a generically-labeled can of “Fear Gas”. As the clerks and guards cower meekly, the gang fills several large sacks full of the filthy lucre.

“We’re too late!” Yep, Batman, Robin and Batgirl arrive after the gang has cleared out every scrap of legal tender. The clerk and guards are STILL sniveling pathetically. That fear gas doesn’t wear off easily. Batman then proceeds to issue some BRAVERY TABLETS to the crew before setting off after Shane. 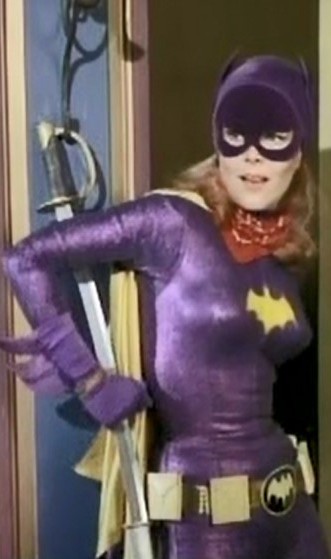 That’s the end of the train scenes (and my review), but I can’t resist 3 more slices of Yvonne Craig as Batgirl. Rowf!