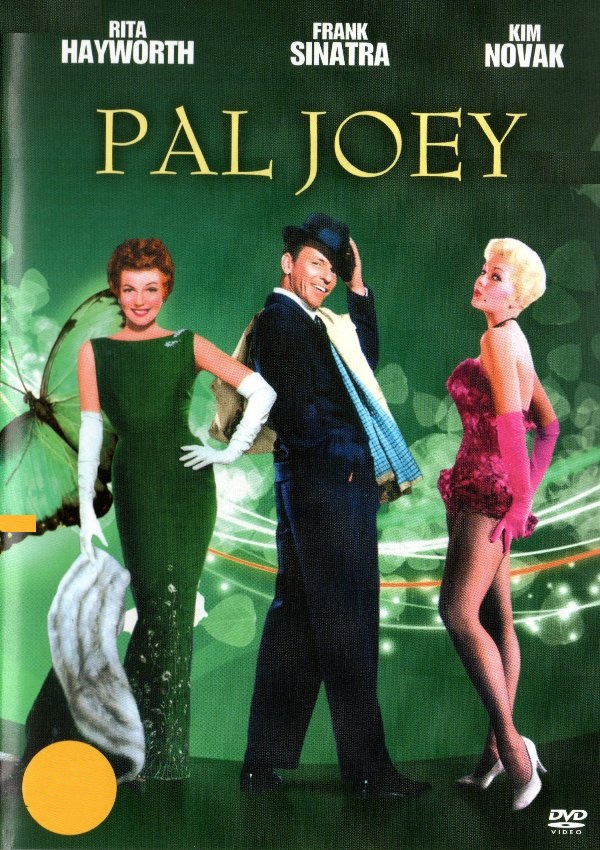 Sinatra does San Francisco! Frank Sinatra plays Joey Evans, a crooning, womanizing cad, unceremoniously tossed onto a Southern Pacific train headed for the Oakland Mole. We are treated to Frank’s encounter with SP #4443, a GS-4 class 4-8-4 locomotive in Espee black/silver. In addition, is footage inside the Mole and a ferry boat ride across the Bay.

I originally reviewed just the Pal Joey movie opening credits (see bottom of this posting for link). Once I started researching the movie, however, I discovered there were additional railroad-related scenes (Berkeley train station, Embarcadero building, Alco switcher & cable cars), so I wound up purchasing the DVD for those scenes as well.

The movie itself is a lot of fun with Rita Hayworth (rahr-RAHR!) and Kim Novak (hubba-HUBBA!) as rivals for Frank’s affections. Let’s take a closer look at San Francisco rails from the last golden days of the 1950’s. Highball! (very dry, please…).

Two soldiers jog past SP #4443 as it comes to a stop with its short train (baggage car and 3 coaches).

The movie begins with a 1957 Ford police car (Thanks, Mark!) from “Gold City” pulling up to the Berkeley, California SP passenger station (4th Street and University Avenue). The two cops are about to put Joey on the train leaving town (he had been trifling with the Mayor’s daughter). 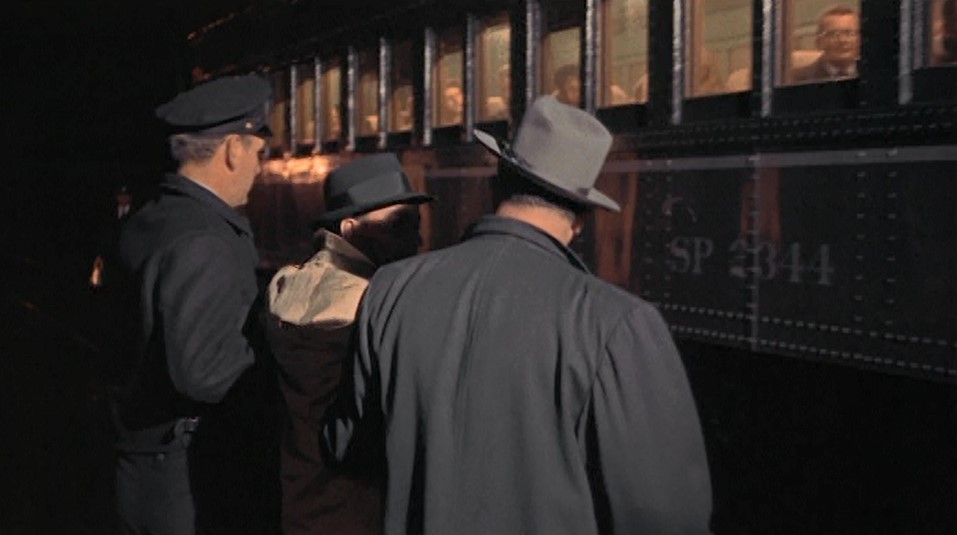 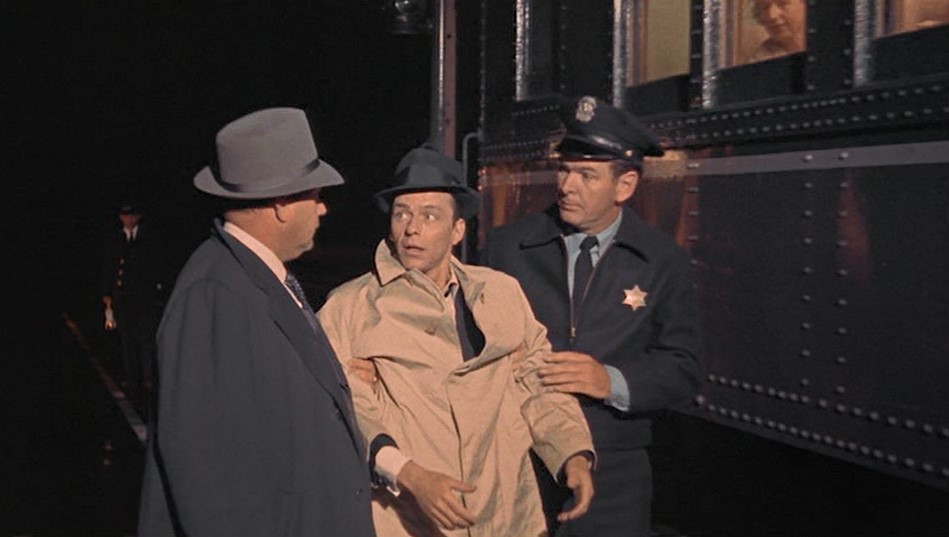 Note the passengers onboard watching the filming, as Joey is frog-marched to the rear of coach SP #2344, then given the bum’s rush onto the vestibule…thus starting the opening titles. 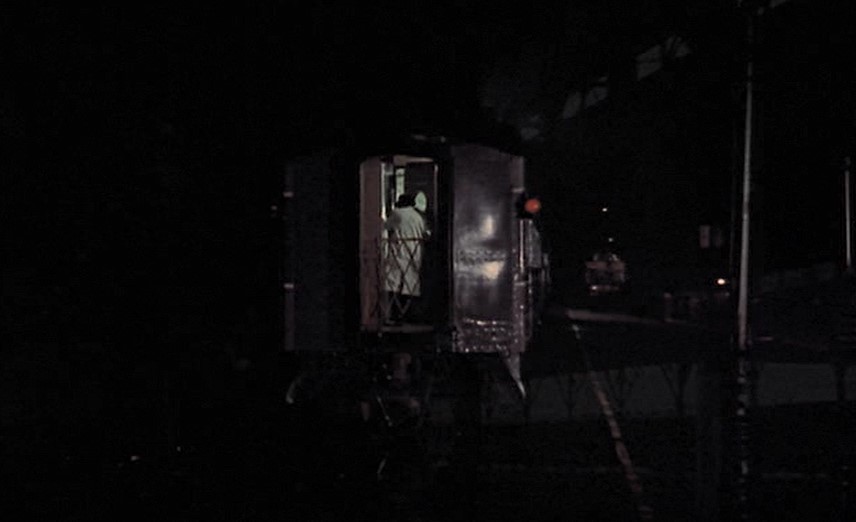 Frank/Joey manages to stand up and enter the SP #2344. Notice one of the rear markers (red) is not illuminated. 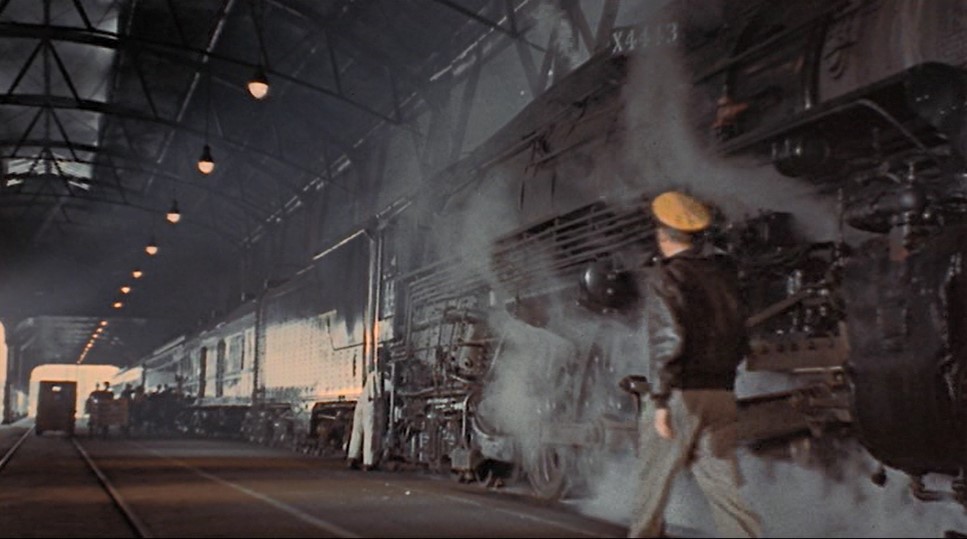 Here comes SP #4443. Note in the first frame, you can see an SP Alco PA passenger locomotive just to the right. Red caps, soldiers, baggagemen and switchmen swarm the train as it steams to a stop at the Oakland Mole. 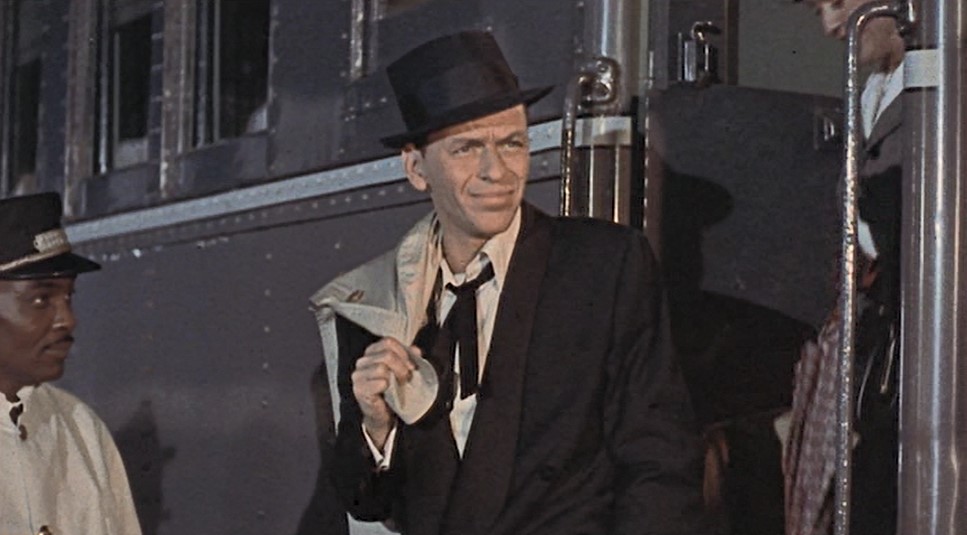 As the porter looks on, Joey alights from the coach, raincoat rakishly thrown over one shoulder. As he walks the platform, Joey comes alongside the massive 80″ Boxpok drivers. 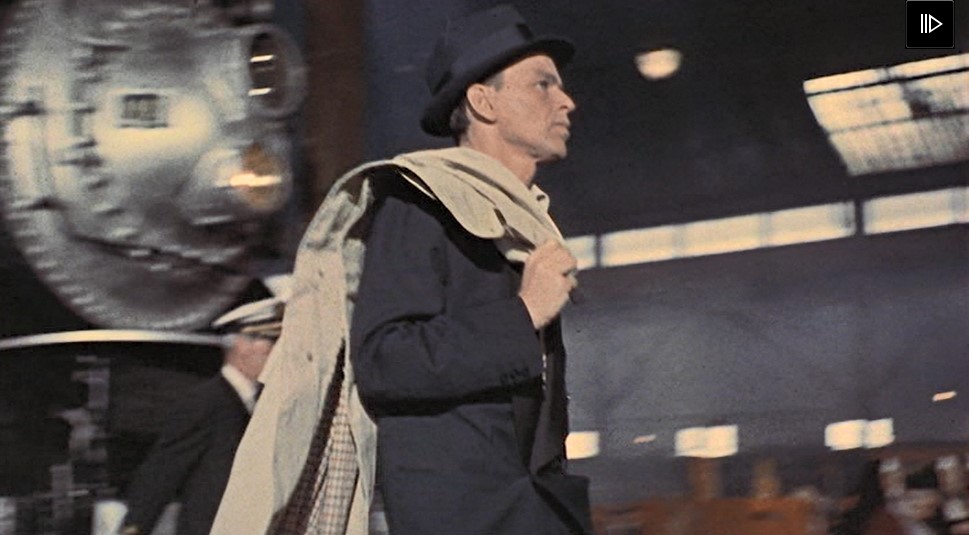 Two classic faces. GS-4, meet the Chairman of the Board. 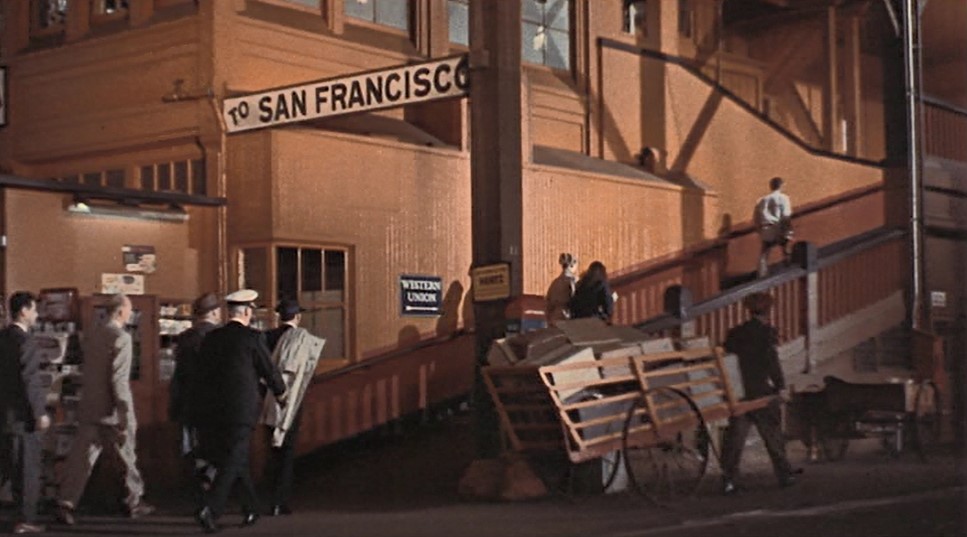 Judging by the headhouse clock, it looks to be about 10:03 in the morning. Keep Right To San Francisco. Joey trudges up the ramp to the awaiting ferry. 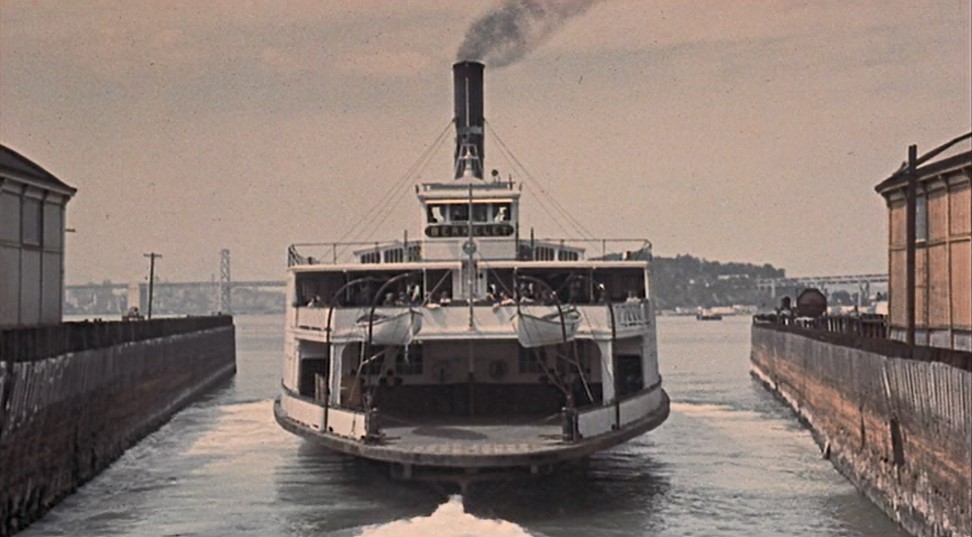 Southern Pacific ferryboat “Berkeley” leaves the Oakland Mole behind with the Bay Bridge and Treasure Island in the background.

Topside, Joey spots a set of gams descending from above. Graciously, he offers his hand to the platinum blonde. 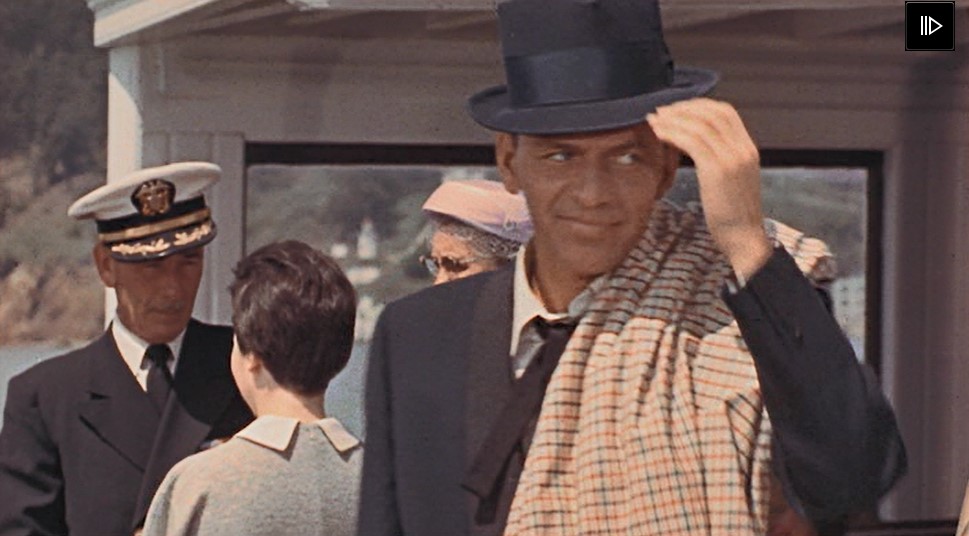 Unfortunately for Frank, she is already escorted by an Army officer. Joey salutes them both goodbye. 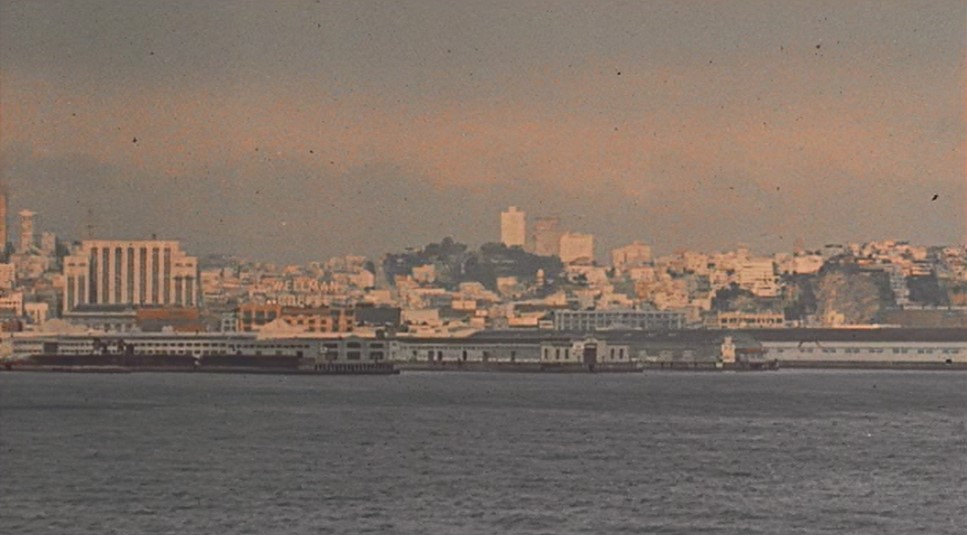 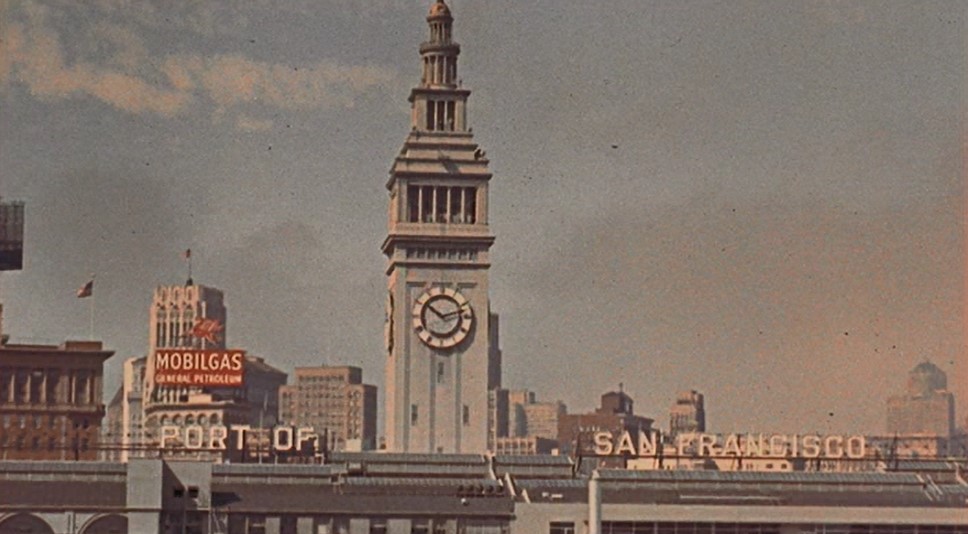 Great views coming into Port of San Francisco by water including the S dot P and Mobilgas signs. The time now is 10:13. Fast boat ride across the bay! The SP sign was a landmark on top of Espee’s headquarters building at 1 Market Plaza. 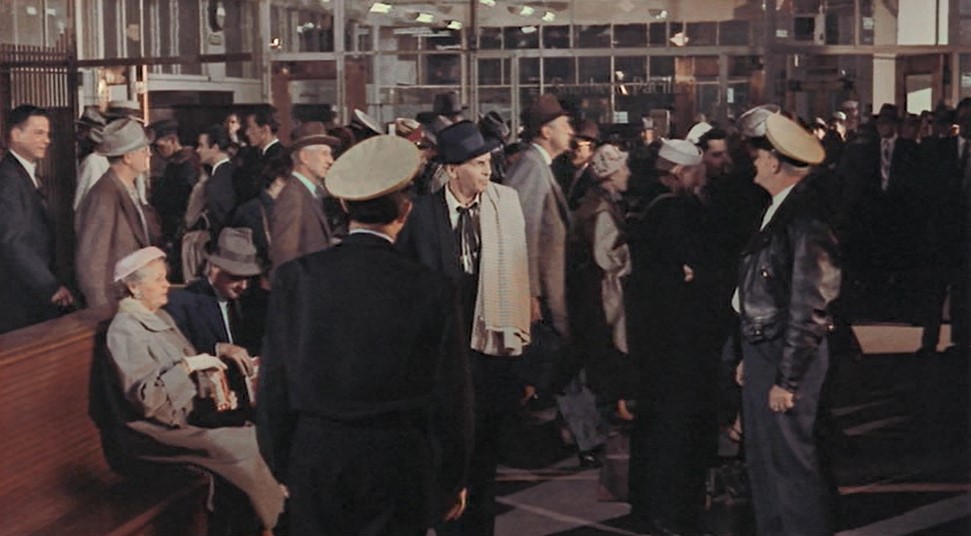 Joey passes through the gates from the ferry dock and makes his way past the cabbies looking for a fare. Notice the “Southern Pacific” on the wall behind Frank.

Alco alert! As Joey emerges out onto The Embarcadero, I spy a State Belt Railroad Alco S2 switcher with a tiger stripe paint scheme. Kick! 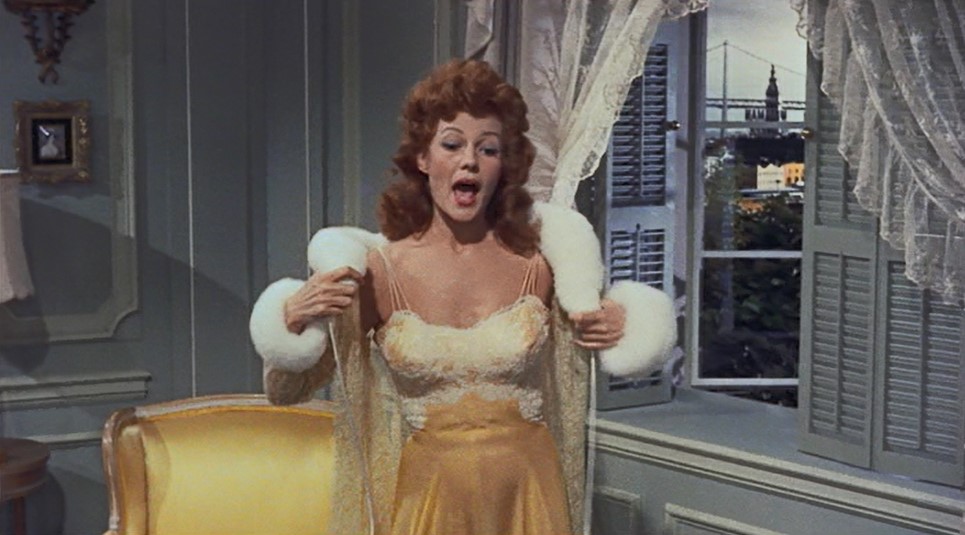 There are no trains around, but who can resist Rita Hayworth (Yowza!) squirming around during the “Bewitched, Bothered and Bewildered” number? (She’s got the hots for Joey.) 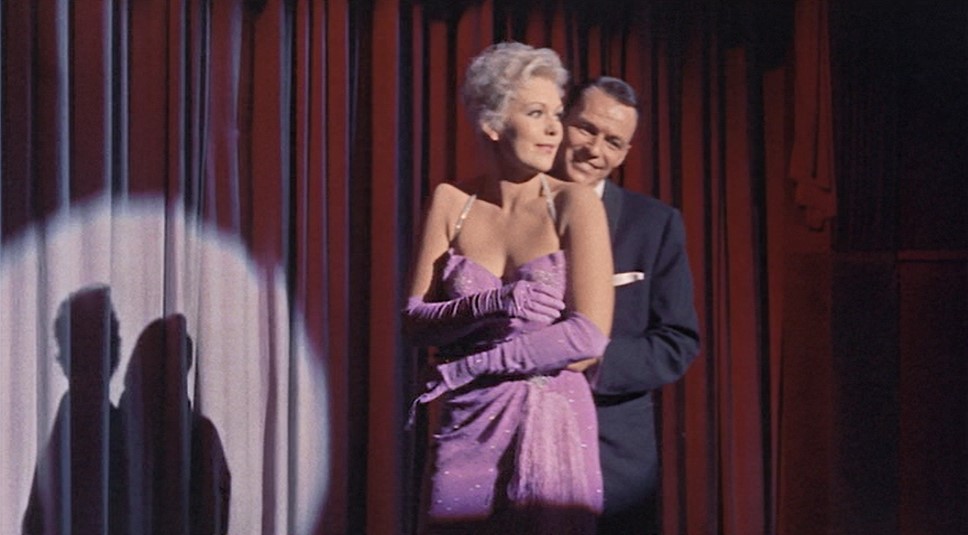 The second part of “Joey’s triangle” is the lovely Kim Novak (Zowie!), seen here doing the “I Could Write A Book” number with Frank. Sinatra himself said about the situation Joey was in…”That’s a sandwich I don’t mind being stuck in the middle of.”

One last “railway” scene to look at about 22 minutes into the movie. A cable car labeled, “Presidio Ave., California & Market Streets” is coming downhill with Kim Novak and Frank Sinatra aboard. In the first view, we see a pink & white 1957 Ford on the left and a 1947 Ford truck on the left (Thanks again, Mark!).

In the last view, we can see a light blue 1952 Plymouth and a dark gray late ’40’s Oldsmobile beside the cable car. Mega dittos, big brother.

Except it isn’t a cable car at all. According to this link, this particular line was closed in 1957, so filmmakers “used a motorized car with a bumper and fenders to hide the wheels”.

Many thanks to citysleuth@reelsf.com, Robert Church, railroad.net and of course, my brother, Mark, for all their help as I researched Pal Joey.

If you’d like to see what I originally reviewed from YouTube, (courtesy of grharper@aol.com), the URL is here: