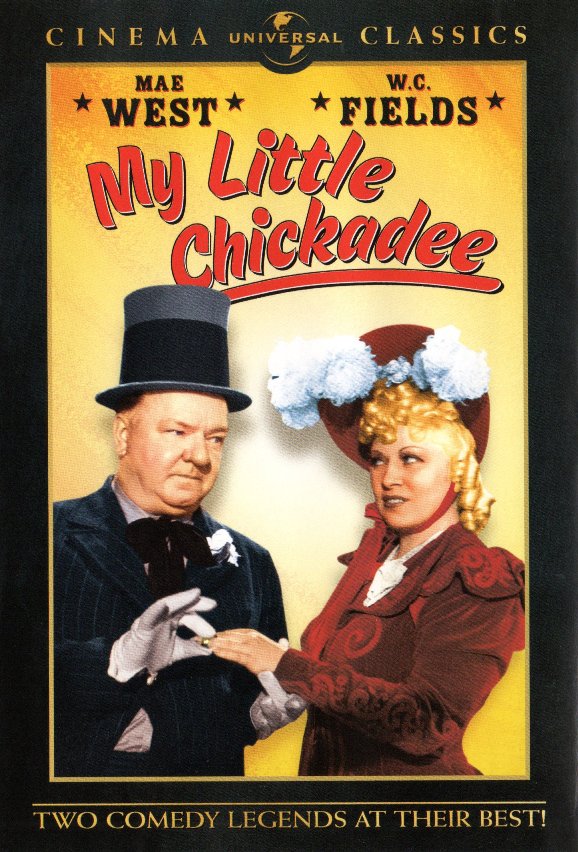 Sierra Railroad 2-8-0 #18 along with combine #5 and coaches #1 & #2, stars in today’s feature. The little Baldwin Consolidation, built for Sierra Railroad in 1906, received just 13 minutes of screen time, but what a cameo. A spectacular Indian attack highlights its trip from Little Bend to Greasewood through the untamed West.

Onboard, Flower Belle Lee (played by Mae West) and Cuthbert J. Twillie (played by W.C. Fields) ham it up in this spoof of western movies giving us a good look at the spartan but classic interior of the coaches (studio set).

It’s a wild ride under western skies for Sierra #18. Let’s check it out. 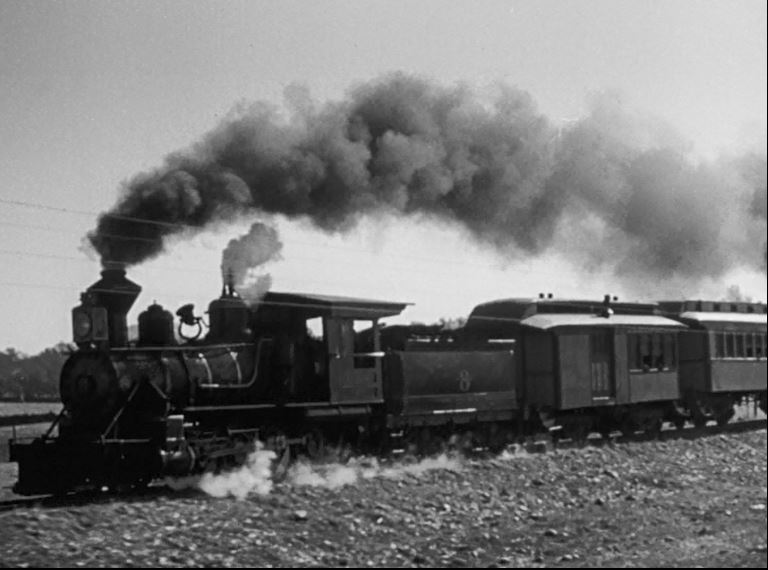 A. P. & S. Railway #8 (Sierra #18 in disguise) is pedaling furiously as it tries to outrun the Cleveland Indians. As it pulls out of Little Bend, we get a closeup of the tender and cab in this rods-down pose.

Does that short combine #5 look familiar? It is, if you’re a fan of Petticoat Junction. Combine #5 along with Sierra #3 was the entire consist of the “Hooterville Cannonball”. 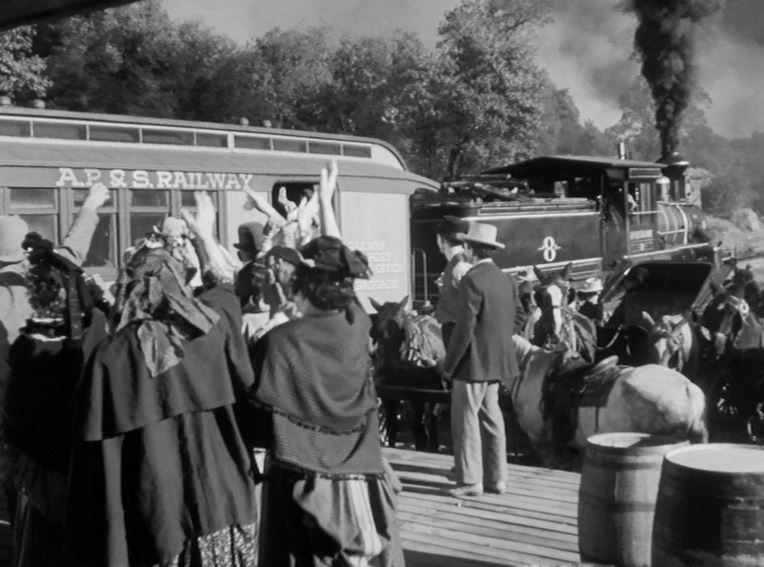 “Little Bend” station is actually Sierra’s depot at Standard, CA. The engineer and firemen wait for the signal to proceed. Goodbye! With an impressive plume of smoke, A. P. & S. #8 sets off on its journey.

The Standard, CA (Little Bend) depot still exists, but has been heavily modified and enlarged into a “Nature’s Whole Food Depot” business. 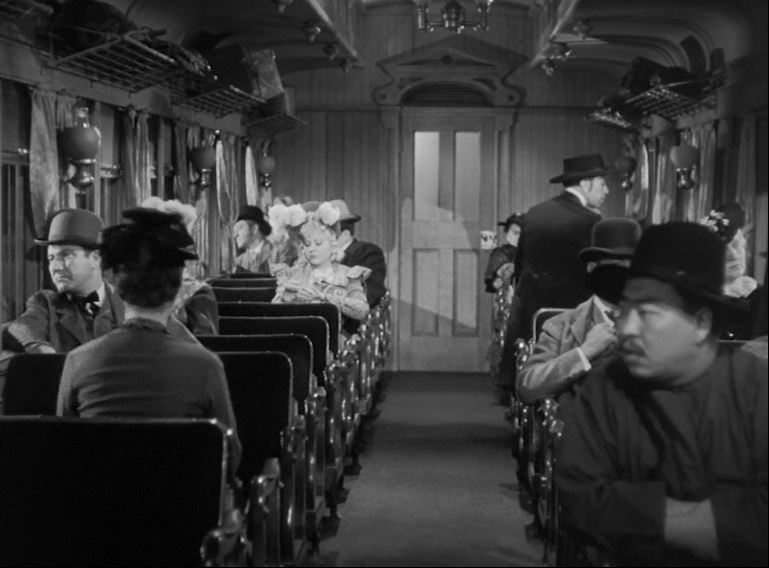 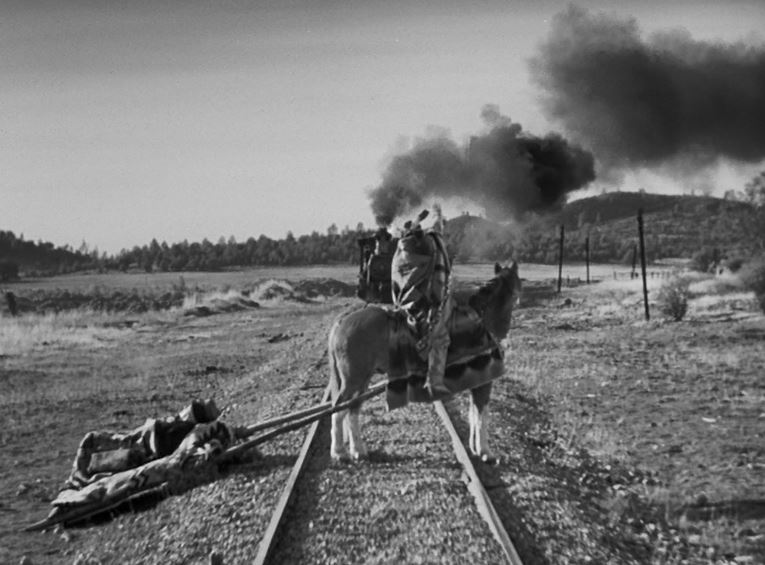 Interior of studio set wooden coach with ornate brass luggage racks and overhead light fixtures; It isn’t long before A. P. & S. #8 comes upon an Atlanta Brave on horseback pulling the obviously-stricken Cuthbert on a travois. 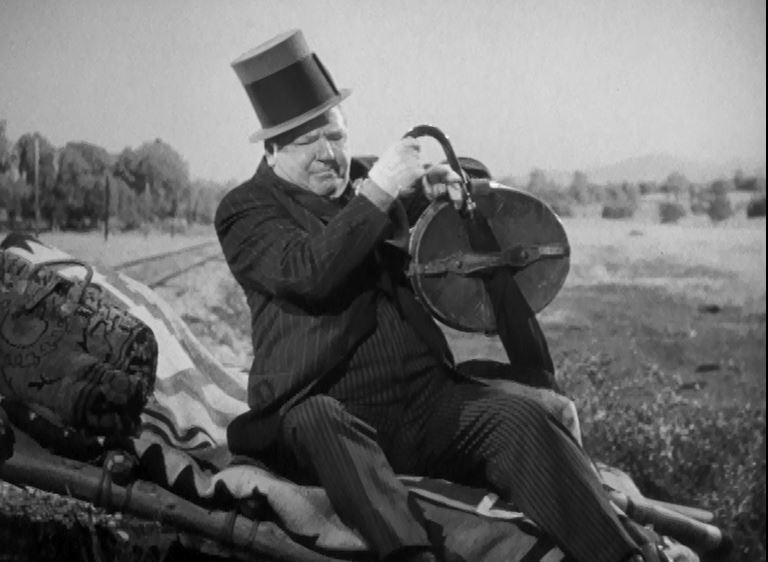 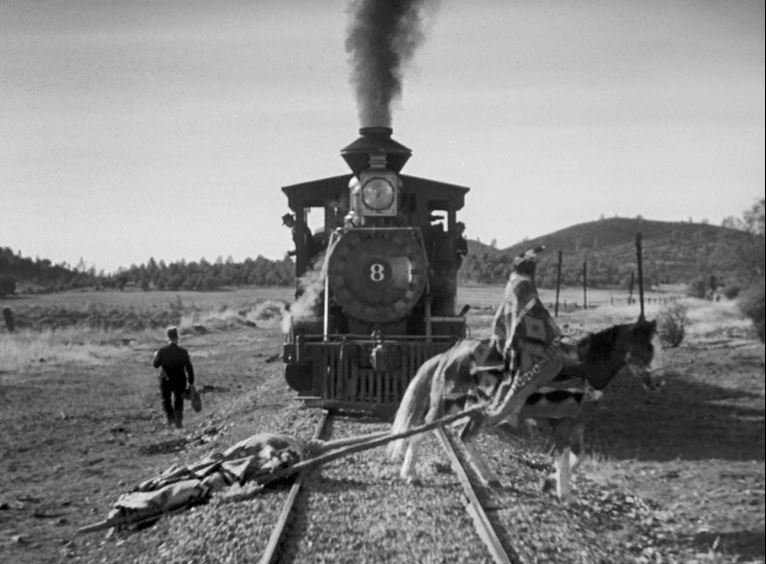 But it’s all a ruse. Con man Cuthbert gets up, waddles alongside the train, and is shortly onboard schmoozing with Mrs. Gideon (played by Margaret Hamilton). Good views of the car interior including a pot bellied stove at one end.

Two good exterior views of the 3 car train as it rolls through Tuolumne County on the Sierra Railroad. 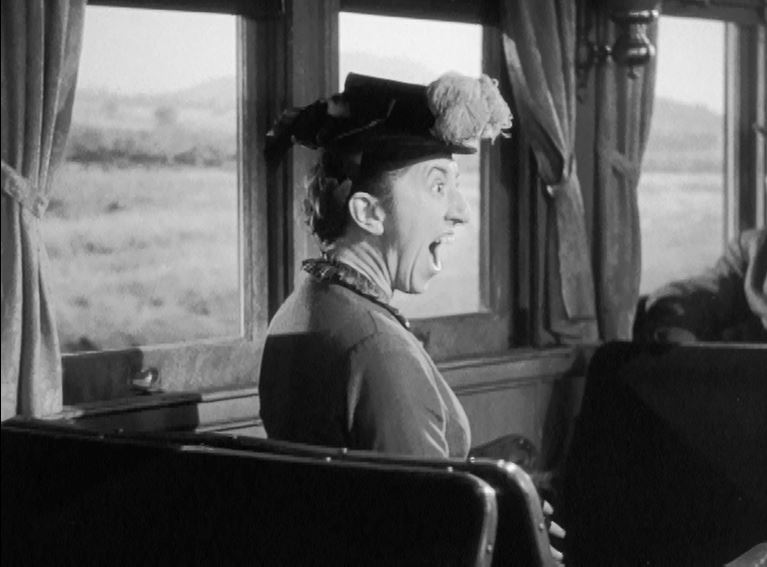 Indians! Margaret Hamilton lets out a blood-curdling scream as she spots the North Dakota Fighting Sioux war party coming alongside. 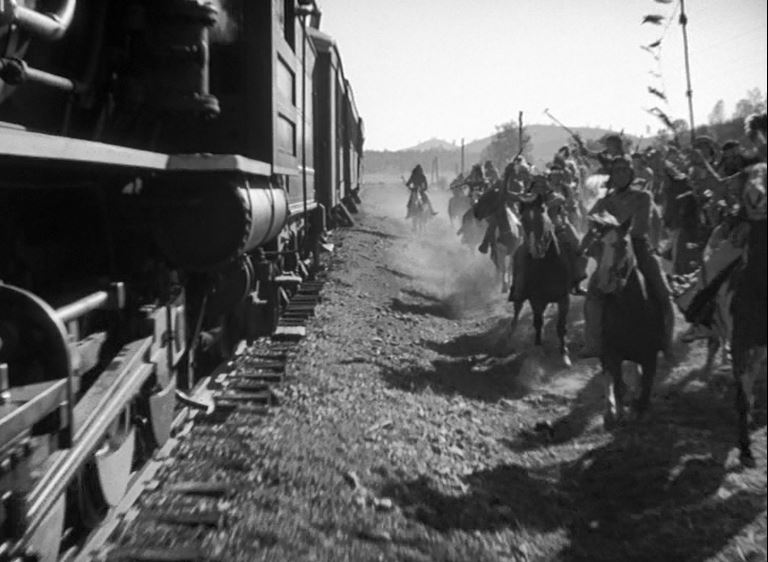 As the other passengers (including W.C.) cower in fear, Mae West views the occasional arrow as a mere annoyance. Finally, she’s had enough, grabs a couple six shooters and starts blasting away at their pursuers.

Notice how the stunt double lifts his leg over the horse to dismount…err…fall off. 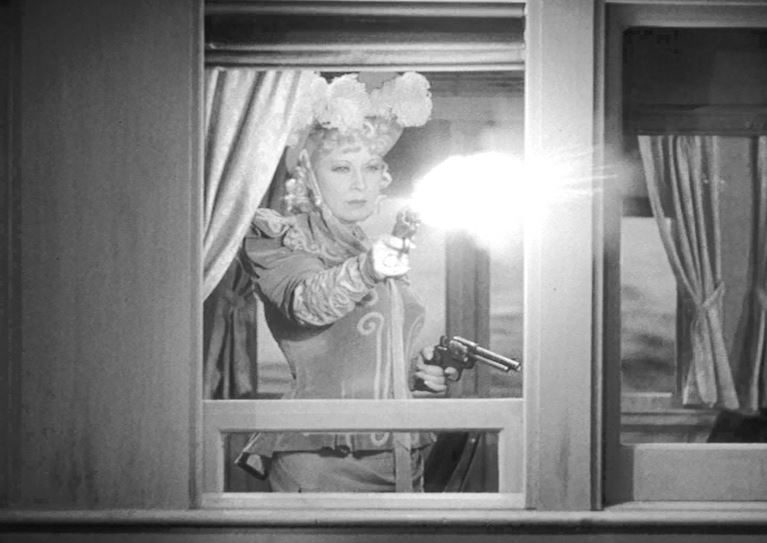 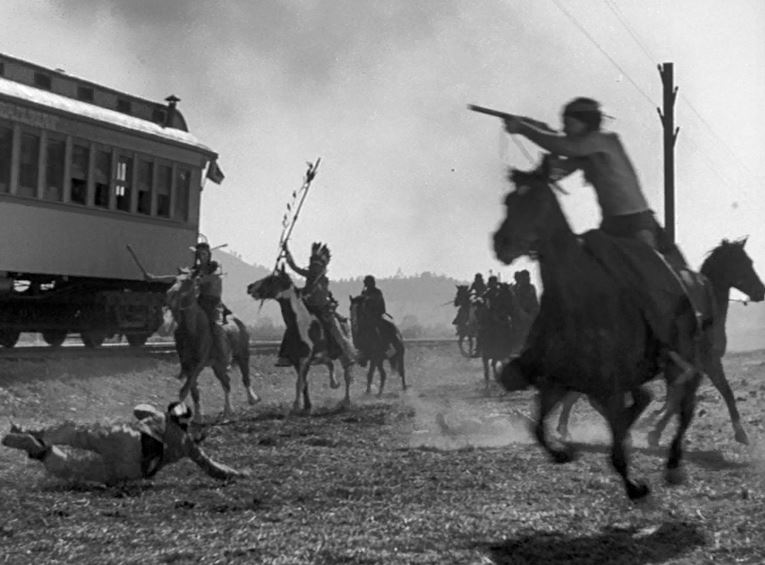 It turns out Flower Belle is quite the dead eye, picking off the Kansas City Chiefs one by one. 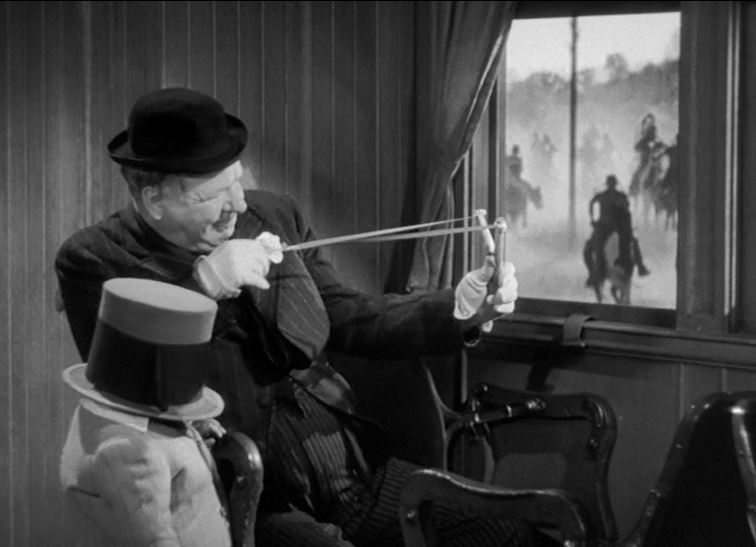 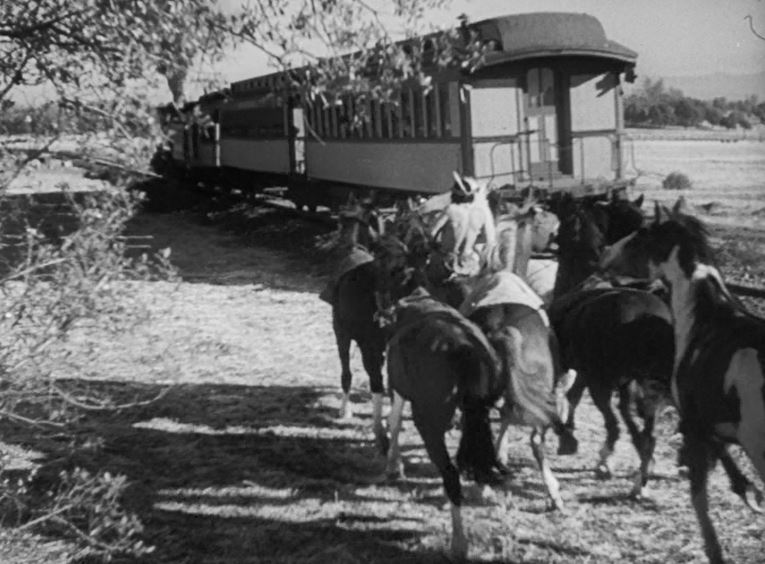 For some inexplicable reason, Cuthbert decides to move from car to car as the rear-projection savages pepper him with ordinance. Trading head gear and slingshot with a small boy, W.C. takes pot shots at their antagonists.

Finally, the train escapes as Mae West has decimated the hostiles down to just The Last of the Mohicans. 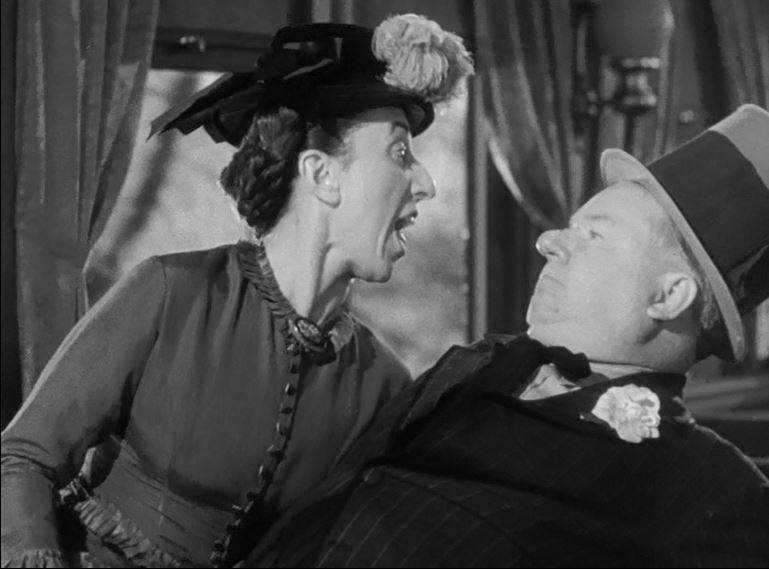 To calm his shattered nerves, Cuthbert takes a belt of the demon whiskey, much to the shock and fury of the prudish Wicked Witch of the West. Schweet! It looks like she’s gonna bite his nose off!

Hand-kisser W.C. begins a short courtship of fallen woman Mae. As we view down the coach corridor, W.C. selects a wedding band (from a large spindle of such rings) and the happy couple is wed onboard.

This was professional behavior on both their parts as reportedly, the two could not stand each other personally. They co-wrote the script and made a lot of moolah on the picture. Just like Cuthbert’s valise, money talks.

All good things must come to an end, and at the 21 minute mark, Sierra #18 arrives at “Greasewood” depot (the former Sierra Railroad station at Chinese, CA). I wasn’t able to track down the exact location, but according to my research, the depot HAS been torn down.

The rest of the movie left off HERE

Sierra #18 is still with us, but in a very dilapidated condition. Retired from Sierra in 1952, the 2-8-0 found its way into the former Fred Kepner collection at Merrill, Oregon where it resides today.

Here’s what IMDb has to say about My Little Chickadee:
https://www.imdb.com/title/tt0032828/