25 fabulous minutes of North by Northwest features railroad-related goodness including Grand Central Terminal in New York City, a ride up the Hudson River onboard the Century, dinner in the diner, and a train-to-waiting room tour of LaSalle Street Station.

Add to the mix Cary Grant (as Roger Thornhill) and Eva Marie Saint (as Eve Kendall) and you’ve got romance, suspense and intrigue galore. So, Watch Your Step and Welcome Aboard! 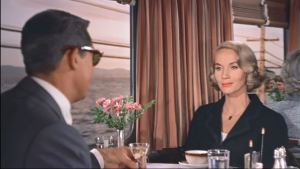 “Tell me, what do you do besides lure men to their doom on the 20th Century?”

As Roger Thornhill fondles his Gibson, Eve Kendall (Rahr-RAHR!) coolly appraises the handsome gent in the horn-rimmed Ray-Bans. Sparks are sure to fly in car 3901, Drawing Room E!

Fondles his Gibson? Hmm… Maybe I should rephrase that…

Our train scenes begin at the 41 minute mark with Grand Central Station in all its glory. Off to one side, Roger is on the phone telling “Mother” (Jessie Royce Landis) his plans to escape town (he’s been falsely accused of murder).

As he leaves the telephone booth, he realizes everyone’s giving him funny looks. Of course, he made all the papers as the U.N. Killer! In the final picture, notice the close up of the famous information desk clock. Five minutes to six. The 20th Century is about to leave town.

Great shot of the New York Central System ticket counter as Cary marches over to window 15. A skeptical clerk (played by Ned Glass) recognizes Thornhill and rats him out to the police. I believe that is a color-coded car space reservation system behind Ned used by NYC System at the time.

BUT…suspecting treachery, Roger has already left the booth and heads to the platform. He blows past the gateman with a cockamamie excuse about seeing some friends off, then boards New York Central sleeping car #10006 “Imperial State”.

According to IMDb Trivia, Imperial State was built by Pullman-Standard in 1939 and scrapped in 1968. It was a 4-4-2 configuration meaning four double bedrooms, four single compartments and two drawing rooms.

Corridor view of Imperial State with Roger looking out the window. A Red Cap and businessman stroll the famous red carpet laid out for every departure of Train #25. Roger encounters Eve for the first time.

In short order, the 20th Century is rolling up the Hudson River at sunset. On board the train’s lounge car, two conductors walk the train and verify their passenger count — except for ticketless Roger who has been hiding in the car’s toilet.

Once the coast is clear, Roger makes his way to the dining car. He is seated by the tuxedo-clad steward and again meets the enigmatic blonde, Eve.

If this is a studio set instead of inside an actual NYC diner, it’s an awfully good replica. Notice that the majority of table seats in the car face the aisle which was NYC practice at the time on the 20th Century. Of course, Cary/Eva have a more traditional chair/table orientation.

Roger studies the menu and Eve recommends the brook trout. After receiving his Gibson cocktail, Roger finally puts the ‘Bans in his pocket and chats up the femme fatale’.

Well done rear-screen projection out the windows as the train goes up the river at dusk.

Time for a smoke! “Roger O. Thornhill. What does the O stand for? Nothing…” (this was a poke at David O. Selznick whose middle initial also meant nothing).

Uh-oh. The Century is stopping. Looks like the New York State Police are getting on board. 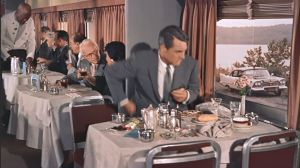 Great shot here that needs to be by itself. Cary Grant hastily gets up from his half-eaten brook trout and beats a hasty retreat.

On the table is a wonderful assortment of railroad silver, china, teapot, and what looks like two finger bowls. In addition there is a bread plate and assortment of fruit and cheese. You can even see money left on the table (Eva departed moments ago).

And out the window (rear screen projection again) is a 1957-58 Plymouth with major league fins! (Thanks for the ID, Mark!!). I WANT that red light/siren on top of the police car.

Another good view of waiters serving at those facing-the-aisle tables. The cops is after Cary!

Eve is reading a (fictitious) book entitled, “The Agreeable Age” as the State Police question her about dinner with R.O.T.

“Still breathing?” Eve uses a porter’s berth key (she calls it a can opener) to lower, rather abruptly, the upper bunk where Roger is hiding. New York Central even let filmmakers open a dutch door for some late evening sunset vistas. #25 is just about to drop that green signal to red.

The bedroom scenes were all built in an MGM set — very accurately right down to the metal hooks and bathroom fixtures.

The heavy love scene is briefly interrupted by the arrival of the porter (NYC System is embroidered on his white coat). This time Roger hides in the attached john — contemplating Eve’s teeny tiny safety razor and soap brush. After returning the porter’s key, she announces Roger will be sleeping on the floor! (sure).

The porter delivers a message, “from the lady in 3901”. Eeee-vil villain (Boo! Hiss!) Phillip Vandamm (played by James Mason) and his trusty sidekick Leonard (played by Martin Landau) make their only on-train appearance of the movie. One final dutch door view of the Century in the gathering darkness.

Comes the dawn, Eve is walking the platform at LaSalle Street Station with Red Cap Roger at her elbow. As they come alongside Imperial State #10006, she is again questioned about the UN Killer.

Several things of note about these screen caps:

Passing lead E8A #4044, Cary and Eva are just about to enter La Salle station when…railroad officials come upon a 5′ 3″ Red Cap down to his skivvies (love the garters) who has been relieved of his outfit! Wonderful overhead view of the trackside gates segues to railroad dicks frantically checking each Red Cap for Cary Grant!

Alas, Roger has ditched the perfectly-fitting Red Cap uniform and is completely hidden behind a mask of shaving cream.

I really like this first picture because we get to see a partial schedule of trains for Rock Island and Nickel Plate (yet another tenant of LaSalle). Steely-eyed Eve Kendall says her goodbyes to Roger, sending him off (paraphrasing Mister Spock from Star Trek) to “pursue a wild goose”. Thus ends the trains for the rest of the movie.

Trains visible on schedule include:

Pretty much the rest of the movie left off HERE.

What’s this? Cary Grant and Eva Marie are necking in an upper berth! I love a happy ending.

And just LOOK at all those Southern Pacific Railroad goodies briefly on display:

Absolutely magnificent movie. Not obscure by any stretch of the imagination, but a train film worth its weight just in quotable lines. “I’ve had enough stimulation for one day”.

Here’s what IMDb has to say about North by Northwest:
https://www.imdb.com/title/tt0053125/