Elvis! Guess what the baby said! Okay, I’m already getting off track here (pun intended), but I always think of the above Apes of Wrath 1959 cartoon when Elvis’ name comes up.

Yeah, Elvis. Here he appears in his first movie as brother Clint, of the notorious, train-robbing Reno Gang. Although he isn’t shown next to a train at any point, he aids and abets his brothers in their crime spree. Actually, Elvis was brought in as an excuse to include some of his musical numbers and be the third figure in a messy love triangle. More about that later.

Today’s movie features TWO studio-owned stream locomotives: 1. Virginia & Truckee 4-4-0 #22, “The Inyo” and; 2. Dardanelle & Russellville 4-4-0 #8. Both of these locomotives are still with us and located in Carson City, Nevada.

It’s the Confederates vs. the Damn Yankees towards the end of the Civil War. Here comes the train. Time to rob the payroll! 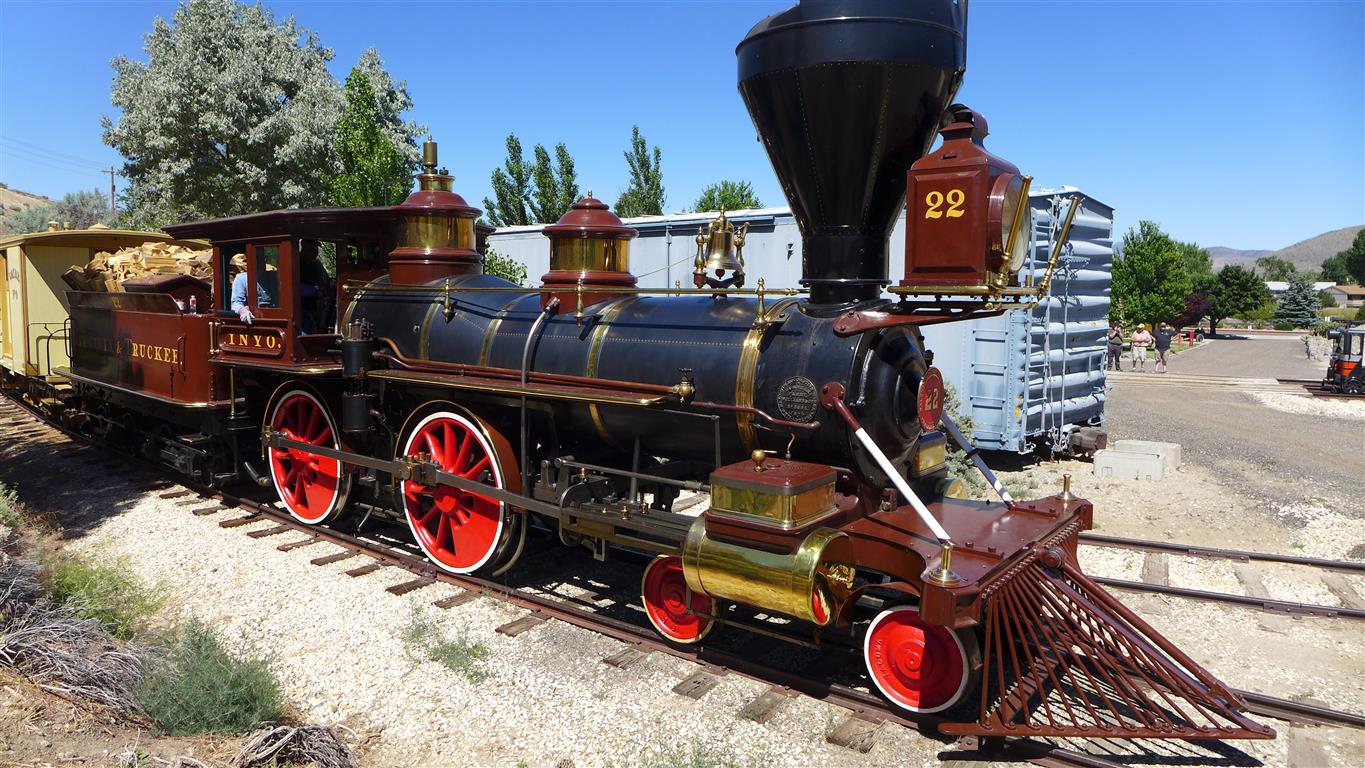 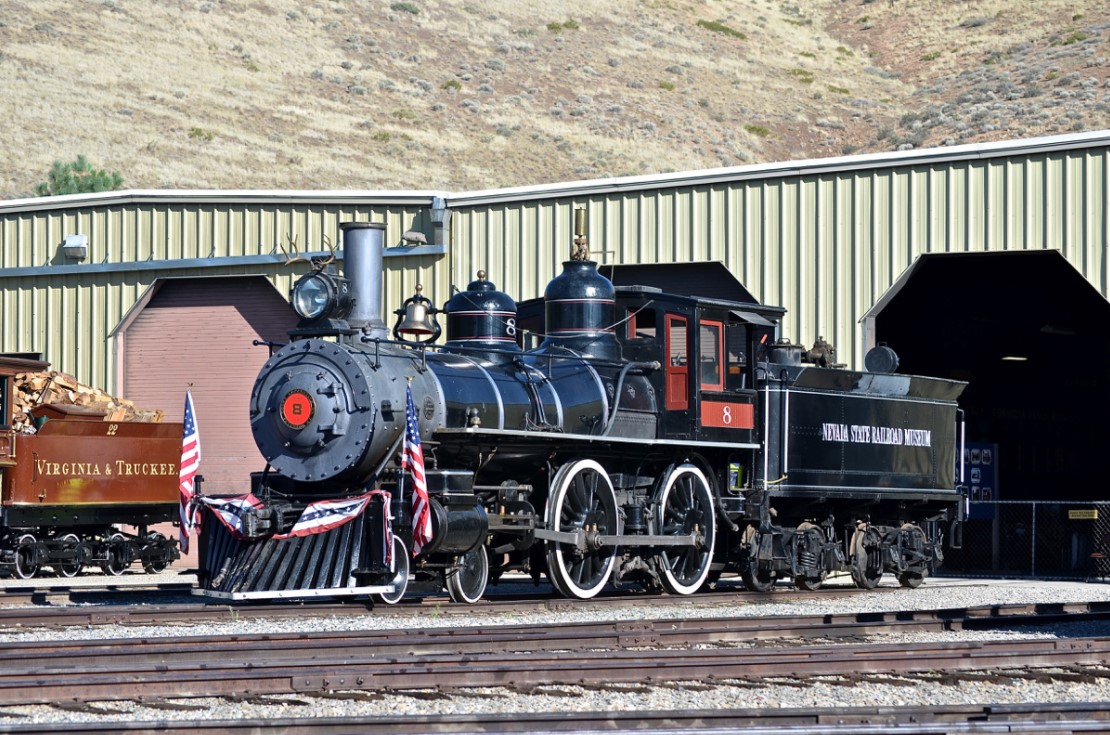 Presented here are two contemporary views of our feature’s two steam locomotives at the Nevada State Railroad Museum. While the Inyo is operational, the D&R #8 is stored awaiting restoration.

Confederate cavalry are riding trackside along the Espee. In the second view, I can see modern day CTC signals and a concrete dispatcher phone booth just to the left of the water tower. This scene appears to be a siding (notice the two tracks) somewhere in the Santa Susana area of Southern California.

Meanwhile at the Greenwood Depot, Union forces are gathered awaiting the payroll. The telegraph reveals the War is Over! I believe they built this station just for the movie. Nice attention to detail too, including an acid-battery power source for the telegraph.

Their elation over the surrender is short-lived, however. Confederate cavalry swarm the Yankees and take over the station. Hey, who’s that mug shooting it out with the telegrapher? We’ll see him later on with Elvis…

With a fine plume of black smoke “Louisiana & Western RR #22” (Inyo in disguise) pulls into the Greenwood depot. The Confederates have now donned Union uniforms and step forward to the baggage/coach combine to receive the payroll.

I like the Louisiana & Western train chalkboard on the depot which indicates “Central Standard Time” — which didn’t appear until 1883.

The conductor comes into the office for his orders. Hey, where’s the regular telegrapher? The C.S.A. dude gets the drop on him, telling him he better keep his mouth shut! Meanwhile, the Rebels are collecting the moolah from the baggage compartment.

Details! Look just past the gun-toting Reb, and you can see railroad timetables in a rack – including one for Santa Fe and one for Great Northern! (neither line had been created yet).

Anyhow, Reb-boy gets distracted, so the conductor waves a frantic “highball” to the head end. Soldiers who had detrained to stretch their legs, scramble to reboard. Nice close ups of the wooden coaches and rear 3/4 view of L&W #22.

The jig is up! The conductor tells the officer in charge what happened and there’s a minor shoot out beside the Greenwood station as the Rebels escape with their ill-gotten gains.

Nice peek at the interior of the baggage compartment. This ends the first train scene after 7 1/2 minutes.

Later, he’s a stompin’ and a clappin’ as Elvis cuts loose with another swinging song. Oh yeah, it was Bill Campbell who offed the telegrapher earlier. Once a heavy, always a heavy.

Our second train scene appears 52 minutes into the movie. It’s nighttime on the fictional East Texas Railroad and E.T. RR #6 (D&R #8 in disguise) is trundling along with the same 3 coaches pulled earlier by the Inyo.

Tickets, please! Vance and Brett are being led off to prison for stealin’ the payroll. Just look at all the wooden details inside this passenger car.

Another runby of the train very nicely lit up! I believe these scenes were filmed on the Fox Ranch (Malibu Creek State Park) where the studio had laid some track for filming.

Stick ’em up! Stop the train, right now! The Reno Gang is making a rescue of the two captives onboard. We get this wonderful view of all the hardware in the cab of D&R #8 behind fireman and engineer.

Back in the coach, additional gang members get the drop on the Feds as the passengers scream in horror. Excellent view of the coach interior front and back.

At the water tank, the Renos make their escape. Just look at that funky truck under the combine in that first picture. Big shootout with folks spilling out of the cars to return fire.

Well, look who’s waiting with the escape horses and a sheepish grin! Vance is nonplussed as he wanted Clint to stay out of the gang’s nefarious deeds. Also, I wanted a chance to use the word, “nonplussed”. It doesn’t mean what you think it does…

One final shot of East Texas #6 / Dardanelle & Russellville #8 as our train scenes come to an end.

If you’re interested, I previously reviewed another telling of the Reno Gang story — this time starring Randolph Scott in Rage at Dawn 1955 — which was filmed on the Sierra Railroad using their venerable 4-4-0 #3 (the Petticoat Junction engine).