Oh, this one should make both my brother and my wife go, “Gah!!…NOOOOoooo!!” (neither can STAND Perry Mason for various reasons, best not discussed here).

But…it’s my blog and there’s trains in it, so a-posting I will go. Three different railroads are seen in stock footage, but more about that later.

Originally broadcast on Halloween night 1965, “12th Wildcat” featured a Southern Pacific passenger train from San Francisco to Los Angeles on SP’s Coast Line. The action takes place in the dark of early morning onboard a lounge car and a couple sleepers in the first 12 minutes of the feature.

Come along and watch with amusement as I search for clues to the identity of some poorly-lit railroad equipment. Objection! Counsel is assuming a fact not in evidence and is leading the witness! 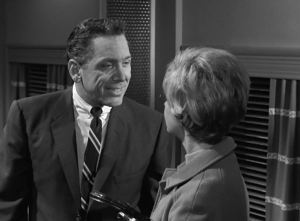 I include this interior shot of the lounge car purely for this guy’s wonderful, leering smirk.

It’s probably just a set, but includes a well-stocked bar — which fuels a drunken souse leading to murder!

END_OF_DOCUMENT_TOKEN_TO_BE_REPLACED

“More powerful than a locomotive!” I remember watching Superman in the theatre when it first came out. Great, fun film and quite a few train scenes to boot. It was a pleasure to get a copy on DVD then go back and research all the locomotive and train sets seen.

The movie would feature a GMD FP7, an EMD FL9 and 3 EMD SPD40F locomotives as well as a studio mockup of villain Lex Luthor’s (played by Gene Hackman) underground lair — done up as a flooded section of Grand Central Terminal in New York! It’s the late 1970’s, so there is plenty of pre-Superliner, “heritage” equipment to be seen.

Let’s take a trip on the Canadian Pacific, the New Haven and Santa Fe railroads, shall we? All Aboard!

The Kansas Star hurtles past the camera under a magnificent sky. This FP7-led passenger train would soon encounter a young Clark Kent racing alongside.