Carl Schaffner (played by Rod Steiger) is a British financier in New York City who is into his company for about $9 million. As details emerge of his embezzlement, Rod/Carl decides to take it on the lam. Thus, he heads down to Pennsylvania Station taking a sleeper on the first train to Texas and eventually Mexico.

Interestingly enough, the Pennsylvania Railroad had a train, the Penn Texas, which ran from New York to St. Louis, MO with connecting sleepers on the Missouri Pacific to Dallas, TX and from there on the Texas and Pacific (a Mopac subsidiary) to El Paso, TX.

This being a British film, most of the interiors were shot in Shepperton Studios with exteriors of American railroad scenes (mostly in the dark) thrown in for good measure.

Train scenes are only present for 20 minutes, but it was enjoyable to hunt down pictures and identify the locomotives shown. Let’s get onboard with shyster Schaffner as he makes a run for it.

The Pullman Porter has his suspicions about the cranky old guy in Bedroom C.

Steiger waits to board his train as the conductor checks tickets of the Pullman passengers. 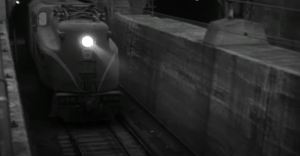 Stock footage of a Pennsy GG-1 electric locomotive (no number readable) emerging from a tunnel — presumably the tunnels under the Hudson River into New Jersey. For comparison, I provide a view of 2 GG-1s. One in Tuscan Red and the other in Brunswick Green, both in pinstripes.

Two views of the interior of Rod’s compartment.

Suddenly, Rod’s train is being pulled by a diesel locomotive. A rather exotic one, at that. PRR #5772. From RRPictureArchives.NET:

“Unit Number 5772, a Baldwin-built ‘Shark Nose’ unit heads up this Pennsylvania Railroad passenger train at Blemar, New Jersey, on the Long Branch Line in October of 1957. Photo Credit: The Charly’s Slide Collection.” #5772 is a BP-20 built by the Baldwin Locomotive Works during August of 1948, rated at 2,000 horsepower, and retired in June of 1964 after just 16 years of revenue service. 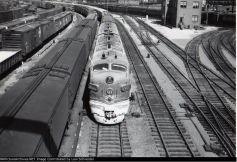 Well, judging from the motive power, our lovable fugitive is now past St. Louis, MO on MoPac rails. The first two images are an EMD E unit #2001? & EMD F unit leading a baggage/RPO and baggage/crew dormitory on a passenger train (most likely the Texas Eagle).

Next image is an A-B-B-A set of EMD F units on a freight train. The last image comes from RRPictureArchives.NET: St Louis location T&P E units on Texas Eagle. 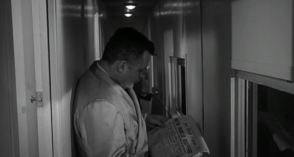 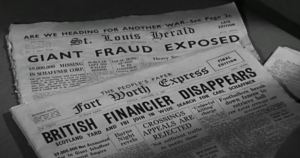 All during his trip to Texas, Steiger had the Porter bring him the local newspapers at each stop. Standing in the corridor, he discovers from the headlines that the jig is up. What to do? 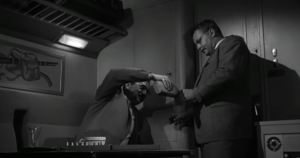 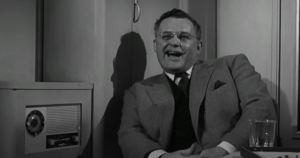 By sheerest coincidence, a gentleman from south of the border, Paul Scarff (played by Bill Nagy) has been badgering Steiger to have a drink with him. Scheming cad that he is, Steiger now laughs at Scarff’s bad jokes and takes him up on that drink. Slipping into his attached bathroom, Steiger fixes him a mickey. Cheers!

That’s quite a funky-looking clock radio at Steiger’s elbow in the laughing picture. I’ve never heard of such a device in a train deluxe bedroom of that era. The Penn Texas must have been a sweet ride! 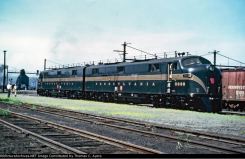 In a “minor” continuity error, Steiger’s train is now being pulled by PRR #5880 (What, back on the Pennsy?) And a completely different make and model of locomotive to boot. From RRPictureArchives.NET:

Here is a duplicate 35mm color slide via Al Chione that was taken in Harrisburg, Pennsylvania, on 24 July 1949. The photographer is not identified. Shown here (R to L) are Pennsylvania Railroad engines #5880 and another E-7 whose number is not recorded. Both are EP-20’s built by GM-EMD and rated at 2,000 HP each. #5880 was built in April of 1949.

Back to the unscrupulous shenanigans. Using the incapacitated Mexican’s passport, Steiger now attempts to “trade places” and make himself appear as Scarff. 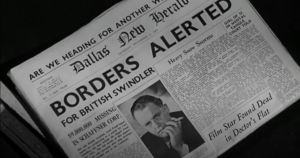 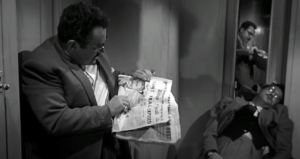 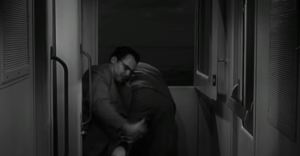 Extra! Extra! British Swindler! Gah! Steiger has to get rid of the body! Clumsily, he shuffles Scarff down the corridor and out the vestibule dutch door. Ole! 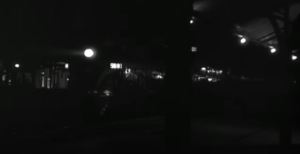 Still on the Pennsy, sister engine PRR #5881 pulls into the station where Steiger will get off (supposedly just 15 miles from the Mexican border). From RRPictureArchives.NET:

Here is a duplicate 35mm color slide by an unidentified photographer that was taken near South Amboy, New Jersey, on 21 June 1957. Shown here (R to L) are Pennsylvania Railroad engines #5881 and another E-7 whose number is not recorded. Both are EP-20’s built by GM-EMD and rated at 2,000 horsepower each. #5881 was built in April of 1949. 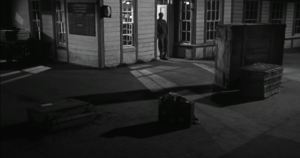 Finally, Steiger-in-disguise de-trains with assistance from the Porter as the Conductor waves a highball. Facing him is the ominously-lit depot. Who is that shady character blocking the doorway? Noir lighting! 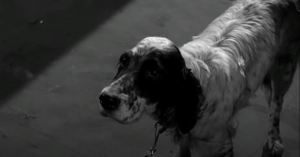 Walking past the RPO, the baggage handler yells at him to pick up his dog! Both baggage man (with PRR cap) and Dolores the dog are skeptical of this guy. Yes, Dolores. The dog had a screen credit and everything.

Still struggling with Dolores, the local yokel from the depot saunters over and asks a lot of nosy questions. I include this shot because of the schedule board behind Steiger labeled “Today’s Trains”.

Trains to St. Louis, MO and Atlantic City, NJ? And this burg is just 15 miles from the Mexican border? Another gaping plot hole! That’s it for the railroad scenes, however.

I’d love to stick around and review the whole movie, but alas, no more trains.

Here’s what IMDb has to say about Across the Bridge:
https://www.imdb.com/title/tt0050097/