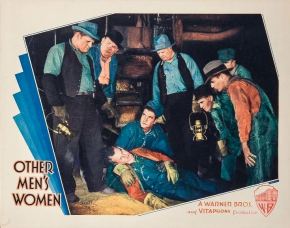 Lots of action (this being a Warner’s picture) including crewmen on the car tops, bailing off and on moving trains, a couple fist fights in the cab and an actual side-swipe wreck of two trains. Future big stars, James Cagney and Joan Blondell make brief appearances in minor roles.

So let’s climb aboard and see Southern Pacific Railroad in all its glory as it rolls through Southern California in the early 1930’s. Highball!

SD&A #103 trundles through the night with a long string of Pacific Fruit Express refrigerator cars bearing both Southern Pacific and Union Pacific markings.

Fireman Bill (played by Grant Withers) is a womanizing scalawag and is seen here hopping off the cab of SD&A #103 and trotting into a trackside cafe for some breakfast. After swatting the waitress (played by Lillian Worth) on the rump, Bill counts the cars as the train rolls slowly past. 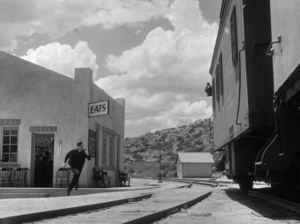 As the caboose appears, Bill jumps onto the rear steps and climbs up on the roof tops to run back to his engine.

Notice another steam locomotive in the siding to the left. I’m not sure, but that might be sister engine SD&A #104. More about #104 later.

Nice, clear view of #103. Bill comes down the gangway as his pal Engineer Jack (played by Regis Toomey) lights up.

No railroader would dismount from the cab that way. They would turn around and face the cab.

Good view of all the levers and knobs in the cab. Fireman’s side on the left. Engineer on the right.

Why, it’s Jimmy Cagney talking to Fireman Bill on the tender of #103! Both remembered to duck when encountering the low bridge. 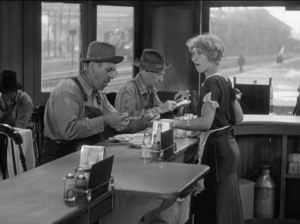 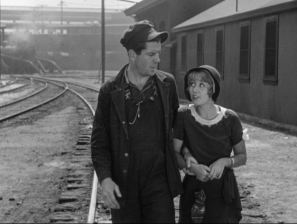 At the roundhouse cafe, Marie (Joan Blondell, rawr-RAWR!) pitches the woo with Fireman Bill, but he’s not the marrying type. Good views of the roundhouse and wye track, though….
Lots of movie left off HERE

Back at the roundhouse, Marie shows some leg to a pensive Bill as SP #1231 passes in the background. Built in 1918 by the Baldwin Locomotive Works in Pennsylvania, it is an S-10 class 0-6-0 switch engine.

Nice view of the engineer’s side of the cab.  Big Fight!  Bill’s been trifling with Jack’s wife, thus the fisticuffs.

Uh-Oh.  Just up ahead, SD&A #104 is taking siding to allow #103 to pass. But Bill and Jack are so busy duking it out, they miss the stop sign at the meet point.

SD&A #104 is still with us! It can be found at the San Diego Railroad Museum in Campo, CA. The museum has a very interesting history of the locomotive on their website. 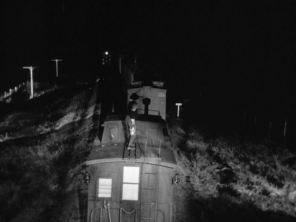 As the two combatants roll around on the deck, we get a great view of the entire cab interior of #103. The caboose crew of the #104 train (on the roof) notices #103 doesn’t seem to be stopping. 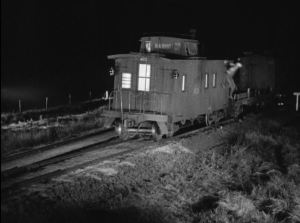 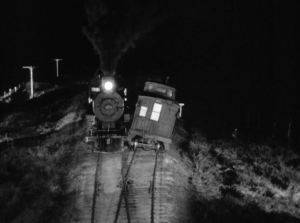 The stunt double jumps off the roof just as engine #103 crunches into the side of caboose #403.

Pow! Wood splinters everywhere and the caboose wheels are knocked sideways. I’m impressed the SP let them smash up a couple trains. Even at slow speed, there was quite a bit of damage.

A whole LOT of the movie left off.

Filmmakers got out the fire hoses as the final climatic scene involved torrential rains and flooding. Here we have a great sequence of SP #2423, a P-1 class 4-6-2 rolling by. 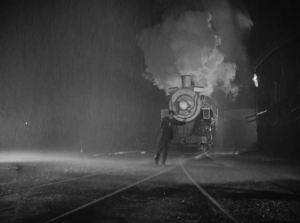 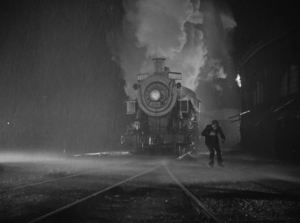 Another great runby of SP #2423 from a different angle making all sorts of steam as it blasts past the camera.

Look at all those steam engines neatly lined up at the (SP Los Angeles) roundhouse! 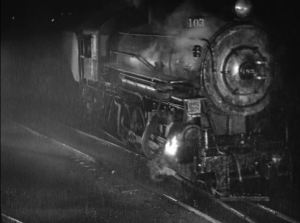 Long story short, heroic Engineer Jack takes the SD&A #103 with its trainload of cement sacks out to the bridge. The hope being that the heavy train will “hold down” the bridge to keep it from washing out. 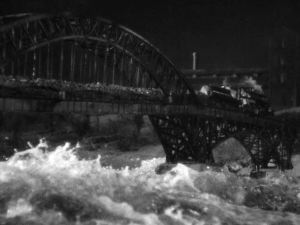 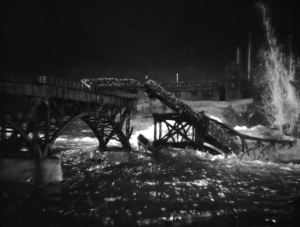 Their cunning plan doesn’t work. In a spectacular sequence filmed with models, Engineer Jack rides to glory as the train plummets into the rushing waters. 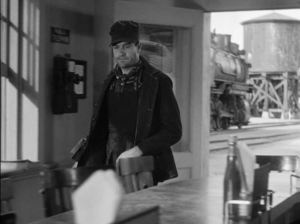 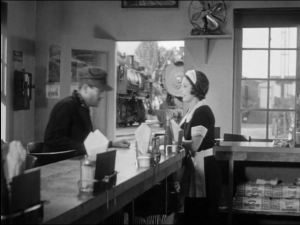 Time passes. A much more thoughtful Bill alights from the good, old #103 back at the little cafe. Great views out the door of his passing train, a water tower and another train pulling up.

Wait a minute.  Engine #103 is the one that joined the fish into the raging Los Angeles river.  You mean they pulled the wreckage out of the drink, rebuilt it and returned it to service?  Okay, whatever… ;p

What’s this? Why it’s Engineer Jack’s widow, Lily (played by Mary Astor) stepping off a coach for a little breakfast at the railroad beanery!

Well, I don’t mind telling you that Bill and Lily hook up. Now full of pep, Bill runs to catch his caboose and climbs to the car tops as it pulls out of town.

Note: Bill is boarding caboose # 403, the same one that was wrecked in an earlier scene. Also Lily’s locomotive is SD&A #104 with #10 in the train boards. After thumbing through a couple Official Guides, I discovered Southern Pacific’s train 10 was the Atlantic Limited from Oakland to Chicago on the Overland Route — nowhere near San Diego. Oh well, that’s movie-making expediency for you. ;p

A very obscure train movie to be sure, but great fun to try and identify all the old steam locomotives. Lots of impressive train action and well worth a look if you’re a railfan. Check it out!