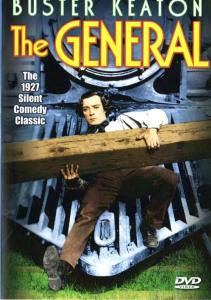 Buster Keaton’s masterpiece from 1926 is both a silent picture and black and white, which makes it about as obscure a train movie to modern audiences, as can be. Based on the true-to-life Andrews Raid during the Civil War, location shooting took place on the Oregon, Pacific & Eastern railroad near Cottage Grove.

Filmmakers were able to discover three 4-4-0 locomotives in Oregon to use for the movie. They were:

Chock full of railroad scenes featuring some incredible stunts by Keaton, I had a difficult time chopping down over 200 screen caps to a manageable 64 for this review.

…where a despondent Johnnie Gray (Buster Keaton) has been denied enlistment, account being too valuable as an Engineer on the Western & Atlantic (W&A) Railroad. As he rests on the main driving rod of the 4-4-0, a hostler moves General into the shed.

A year later, Engineer Johnnie is still mooning over his fickle ex-girlfriend, Annabelle Lee (played by Marion Mack), who wants to see him in uniform. Here she is boarding Buster’s train to visit her father, a wounded Confederate officer. 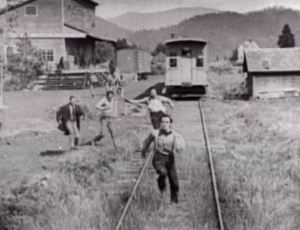 At Big Shanty, GA, passengers pile off the train for the meal stop. I love the whites of his eyes as an Andrews Raider “pulls the pin” between the boxcars and passenger cars. A good view of the entire train as the Andrews Raiders commandeer the General and two boxcars. Seeing his beloved General being hijacked, Johnnie sets off in foot pursuit. 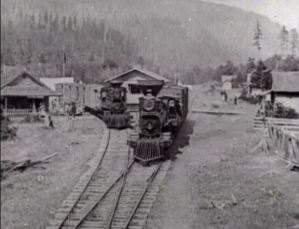 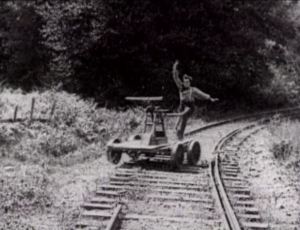 The Andrews Raiders roar north through Kingston, GA. Note W&A #5 “Texas” and train in the siding. The raiders have been doing dastardly deeds along the way, cutting telegraph wires and removing sections of rail…as Buster discovers when his handcar hits the ballast. 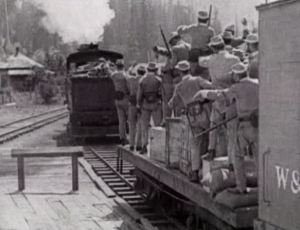 Finally stumbling into Kingston, Johnnie enlists a platoon of Confederate soldiers to join the chase. Unfortunately, Buster in the Texas leaves them behind as he steams off in hot pursuit. 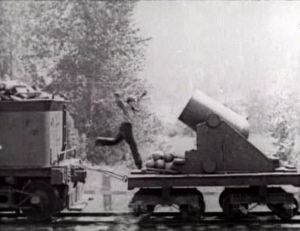 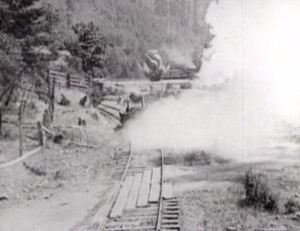 Johnnie climbs to the cab roof for a better look ahead; Along the way, he picked up this nifty little cannon/mortar thing which he proceeds to load and fire at the Raiders. 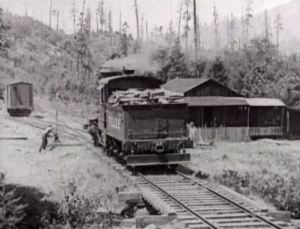 The Raiders uncouple a boxcar to hinder Johnnie’s progress. Using his cowcatcher, Johnnie pushes the boxcar onto the siding, lines the switch for his engine and proceeds forward….only to discover the boxcar has rolled THROUGH the siding back onto the main line! This is Buster Keaton’s astonished face. 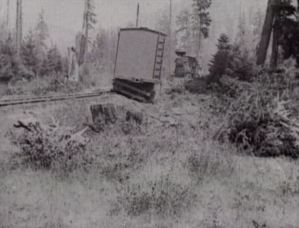 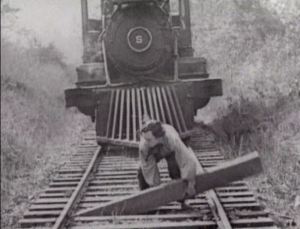 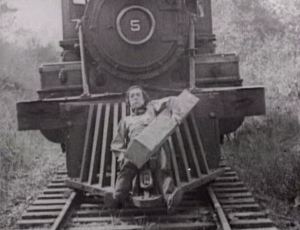 The Raiders begin tossing railroad ties onto the line which derails the errant boxcar in a spectacular shot. As the Texas slowly drifts along, Johnnie struggles to remove a tie wedged in the track before being scooped up by the cowcatcher. 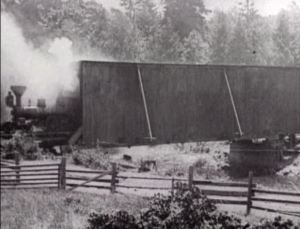 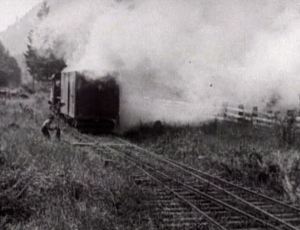 Andrews gang tries setting their last boxcar on fire and leaving it inside a covered bridge. Johnnie manages to push it through the span then onto a siding. 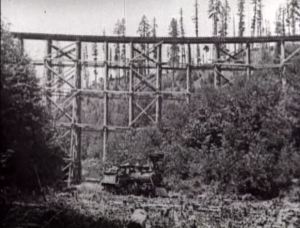 The General passes under, then onto a spectacular wooden trestle, then proceeds to drop more railroad ties onto the Texas passing underneath.

A good chunk of the movie left off HERE. 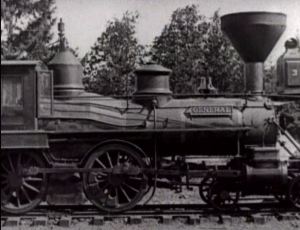 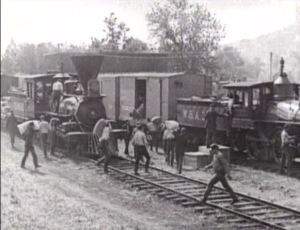 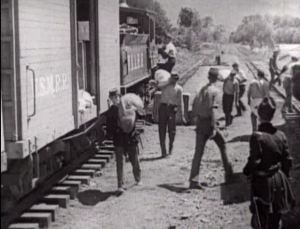 Comes the dawn, Johnnie and Annabelle find themselves trapped behind Union lines with both the General & Texas commandeered for Yankee supply trains.

Stuffing Annabelle into a gunny sack, Johnnie fireman-carries his beloved, joining the Yankee troops as they hoist supplies aboard. 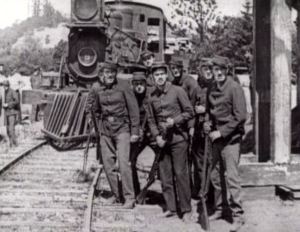 In no time at all, Buster has pulled the pin and sent General roaring South in a fine display of steam. Union soldiers gaze on in astonishment and we get our first good look at locomotive #8. 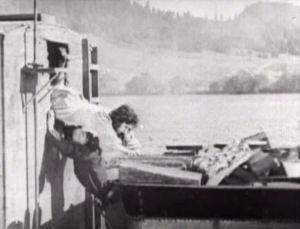 Johnnie chops a hole in his boxcar and rather awkwardly extricates Annabelle from her confinement.

What follows is a series of gags as Buster somehow knocks out the entire rear end of the boxcar, then proceeds to toss all manner of detritus into the path of Texas and #8. 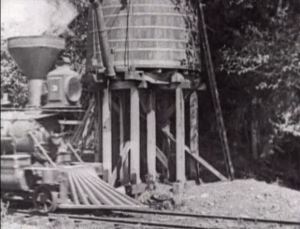 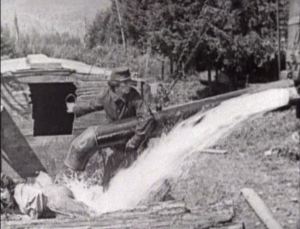 Stopping for water, Buster manages to instead knock over Marion with a gushing waterfall of liquid goodness.

A bit of trivia…Keaton did not tell Mack beforehand about the dousing she would get.  The shocked look on her face is genuine. 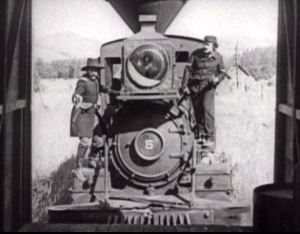 The Texas is getting close, but just as Yankee solders climb aboard the boxcar, Johnnie pulls the pin leaving them behind to take pot shots at General. Great view of the front of #5, Texas, BTW. 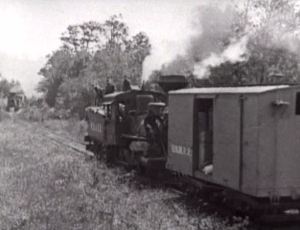 Eventually, Texas comes to a siding to push the boxcar aside…only to back into the #8 and completely flattening out its cowcatcher, POW! 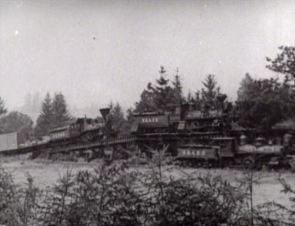 Johnnie uses a chain to wreck the switch points causing their pursuers to “take siding” up a timber ramp. Thus, we get a view of all 3 locomotives used in the movie. From left to right: #8 (no name visible), #5 “Texas” and #3 “General”. 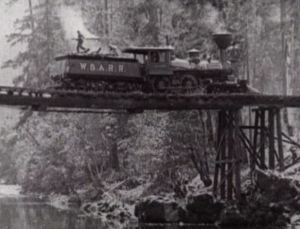 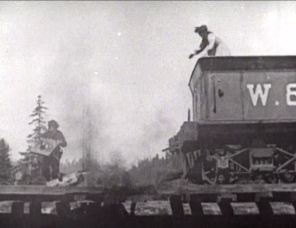 At “Rock River”, Johnnie stops General on the impossibly-rickety bridge (how did they keep that structure from collapsing under the engine’s weight?). Setting fire to the span with kerosene from the General’s headlight, Buster finds himself on the wrong side of the bridge as the pyre ignites. (He wound up taking a leap into the shallow waters below.) 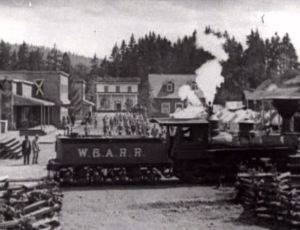 While the Yankees are still futzing around trying to repair the switch, Johnnie has brought General back to Confederate lines, whistling furiously and alerting the troops to the invading force.

As the bridge burns furiously, the Union boys have finally repaired the track and made it to Rock River. This sets up the most stupendous train scene in the movie. 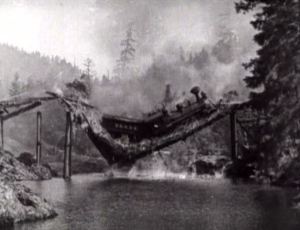 The Yankee general proclaims the burning structure safe (typical manager) and sends the Texas across with disastrous results.

This scene was filmed on location with one of the three locomotives and the wreckage was left on site until World War 2, when the metal was fished out of the drink for its scrap value.

There’s more to see, but I’m going to end my review right here. The General was a terrific movie, however critics at the time roundly panned it and indeed the public stayed away and the film lost money. It wasn’t until much later that The General was recognized for its fantastic stunts and technical brilliance.