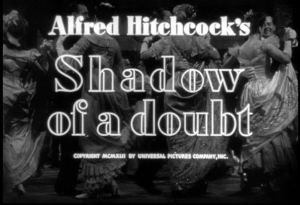 Teresa Wright and Joseph Cotten star alongside the Northwestern Pacific Railroad (NWP) in this Hitchcock classic. I know. It’s not particularly obscure, but I already had a DVD lying around…

Anyways, the two train scenes in this picture feature steam engines and old heavyweight passenger equipment. The coming and going of Uncle Charlie (Cotten) happens at the Santa Rosa train depot which is still in existence as a visitor’s center.

A little boy is mesmerized by the smoke, steam and churning drivers as NWP #142 arrives in Santa Rosa with Uncle Charlie aboard. 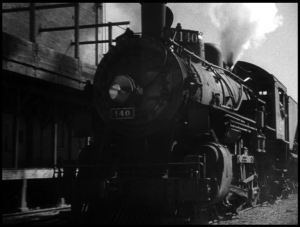 About 16 minutes into the movie is our first train scene. Whistling for all it’s worth, NWP #140 is passing what looks like some sort of loading platform (an icing dock, perhaps?). A porter comes down the aisle of the Pullman with just one section made up for night. Feigning illness, Uncle Charlie is cowering in there hiding from prying eyes.

The porter tugs on the curtains to let Uncle Charlie know his stop is coming up. Across the aisle, a foursome is playing cards. That’s Hitch holding the entire suit of spades. 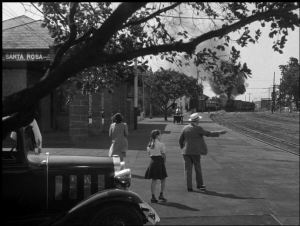 Niece Charlie (Wright) drives the family car alongside the Santa Rosa depot; As the family walks the platform, the engineer of NWP #142 is already laying on the smoke. Compare with this studio publicity still of the same location. 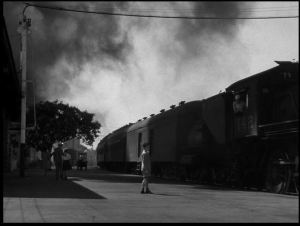 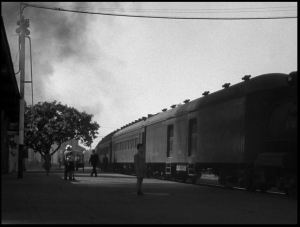 The ominous smoke bodes danger in the arrival of the eeevil Uncle Charlie; the engineer leans way out of the cab for his cameo; you can just make out Northwestern Pacific lettering on the baggage car. 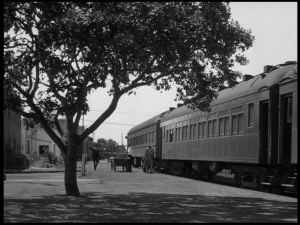 Uncle Charlie requires assistance down the steps of the Pullman; The conductor waves a highball after Uncle Charlie and his luggage are deposited on the platform.

Well, hello there! Teresa Wright (Yowza!) is all smiles as she spots Uncle Charlie trainside.

The entire family pitches in to carry Uncle Charlie’s suitcases along the platform, past the baggage cart. Uncle Charlie is lookin’ sharp with his suit, snappy fedora and wood-knobbed walking stick.

Pretty much the entire movie left off here. 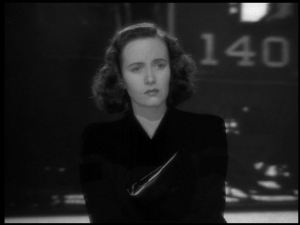 Things are way more subdued at Uncle Charlie’s departure. As old number 140 pulls in to the Santa Rosa depot, Niece Charlie stands apart from her namesake — with more than a shadow of a doubt of his wickedness (he tried to bump her off at least twice).

One final farewell between brother and sister at the vestibule. Niece Charlie came onboard only to shoo her siblings off the train. 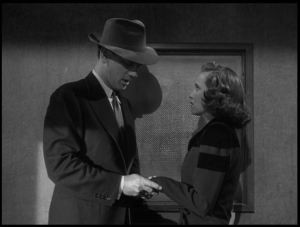 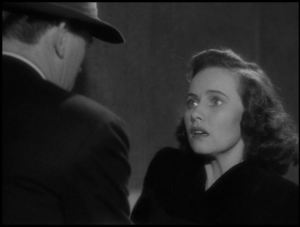 BIG mistake on her part. Uncle Charlie knows she’s onto him and plans to do her some bodily harm as the train starts pulling out of the station. That is a look of sheer terror! 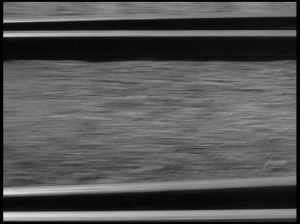 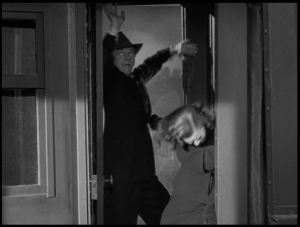 Uncle Charlie’s got the door open, but his plucky niece manages to shove him off the train…AHHHH!!! Into the path of the oncoming 2-8-0 SP #2708. Atta, girl! 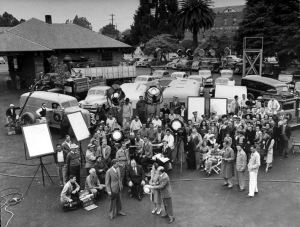 Great movie. Hitchcock was not called the master of suspense for nothing. One more publicity still taken at the Santa Rosa depot. Look at all that gear, cast and crew!