Here I come, to save the daaaay! Yes, it’s Mighty Mouse once more battling Oil Can Harry for the affections of lovely Pearl Pureheart.

This train-laced, Terrytoons animated short, is done in a wonderful, fake-opera, melodramatic style with MM (our hero) belting out tenor, OCH (our villian) singing bass/baritone and PP (our damsel in distress) warbling soprano.

The art work is right up there with Warner Brothers for quality and the animators did a great job with backgrounds and interiors. Lots of action and enough asides and adult-gags to keep it interesting.

On with the show!

Wonderfully-detailed coach interior right down to the red-plush seats and pot-bellied stove; Standard old-fashioned steam locomotive about to change into an anthropomorphic object at the hands of Oil Can Harry.

Having won 4 Oscars, today’s movie is hardly obscure, but the use of three, count ’em THREE steam locomotives makes this a flick worth reviewing. Filmed on the Denver and Rio Grande Western (D&RGW) narrow gauge as well as an obscure Mexican 3-footer, there is a tasty selection of railroad hype to sink our teeth into.

Grateful thanks to Larry Jensen and his magnificent book, “Hollywood’s Railroads – Volume Three – Narrow Gauge Country” for being my go-to source for all-things-railroad in this classic Western.

So grab the dynamite and let’s go rob a baggage car or two. Stick ’em up!

There’s lots of leaping in this movie. Here we see The Kid jumping from car to car in the second hold up and making like a bird, bailing off the cab of #473 in the third robbery.

END_OF_DOCUMENT_TOKEN_TO_BE_REPLACED

Train scenes in this film were brief, but feature 4 different steam locomotives, one of which I’ve not been able to positively identify. A big shout out to Larry Jensen whose “Hollywood’s Railroads, Volume 3” book helped me identify one engine used on the CBS Studio City (CA) lot.

As usual, I’ll concentrate on the railroad scenes in my review, even though the movie itself is great fun to watch — back when Tinseltown knew how to make an enjoyable, entertaining picture.

Helicopter shots of this train were used at the beginning and ending of today’s reviewed movie.
END_OF_DOCUMENT_TOKEN_TO_BE_REPLACED

While not particularly OBSCURE, (Trains Magazine rated it the #1 greatest railroad film, evah), this black & white MOVIE is chock full of TRAINS from start to finish. So, two out of three ain’t bad.

Mind you, it’s a foreign film, which I usually don’t review, but The Train features so many explosions, spectacular derailments and is steam locomotive-propelled throughout, I just couldn’t pass it up.

So come on, all you World War 2 buffs, let’s check out how the railway workers of the French Resistance take on the Germans in this gritty, over-exposed iron horse opera. 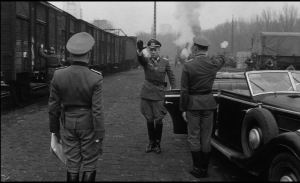 Colonel Franz Von Waldheim (played by Paul Scofield) is the art connoisseur who has looted a trainload of paintings from the Musee du Jeu de Paume and intends to take it back to Germany for ransom (“enough to equip 10 panzer divisions”).

END_OF_DOCUMENT_TOKEN_TO_BE_REPLACED 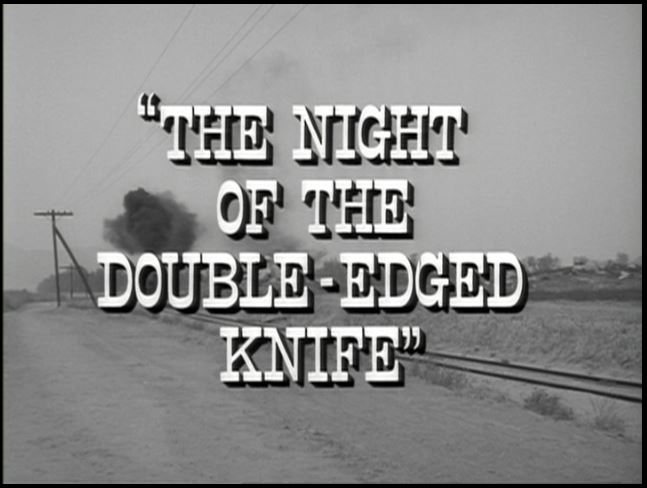 “Heading for the Nineties, Livin’ in the Wild Wild West!”

Okay, the above has got nothing to do with today’s review, but I always liked that song.

Jim West (played by Robert Conrad) and Artemus Gordon (played by Ross Martin) star in this post-Civil War spy caper in the American West. Their preferred method of transportation is their own private car “Wanderer 1” towed by (natch!) a steam locomotive.

Although I’m reviewing a black and white episode from the first season, I will supplement with color views of “The Night of the Vicious Valentine” from season 2.

Motive power for the train was provided by venerable Virginia & Truckee 4-4-0 #22, “The Inyo”. This is from the days when she was owned by Paramount Studios. All exterior train shots were filmed around Menifee, California. 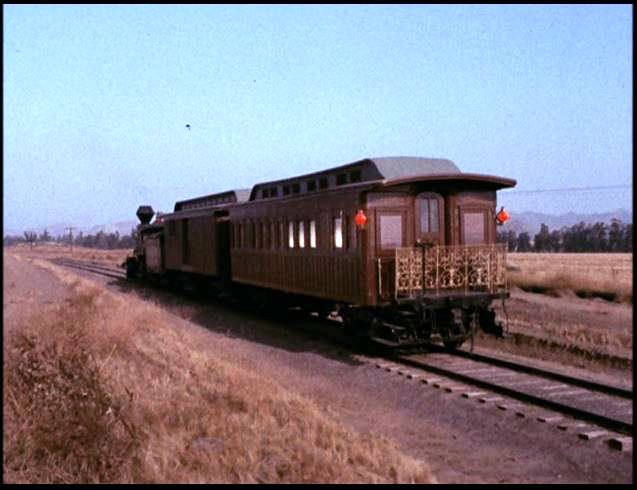 Compare B&W and color poses of Inyo, a baggage car and Wanderer as they pause for Jim and Artemus to leap into action!