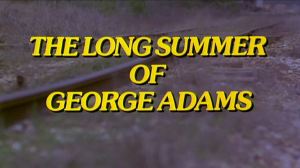 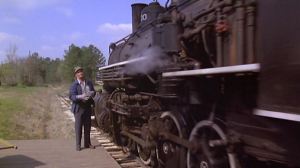 This made-for-TV movie stars TWO steam locomotives. The first is Texas State Railroad [TSR] #400, a Baldwin 2-8-2 built in 1917. The second is an Alco RS2 diesel locomotive #7 built circa 1947. (Alco diesels were always referred to as “honorary steam engines” by railfans, due to the copious amounts of black smoke belched skyward upon starting.)

#7 started life working for the Point Comfort & Northern Railroad in Texas, coming to TSR in 1975. Since this movie was filmed, the #7 has been repainted into a beautiful Southern Pacific “Black Widow” scheme.

James Garner (Yes, Mister Rockford Files) is the lead character in our motion picture and the film is the story of a mid-20th century railroad worker about to lose his job due to diesels replacing steam.

Many thanks to good friend Scott Tanner who slipped me a DVD of this flick for inclusion on this blog. And now, let’s see Rockford and the boys playing with their trains!

It appears to be early spring as TSR #400 and train roll through East Texas.