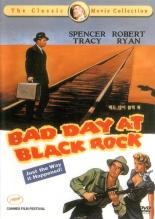 Wow, what an opening! Southern Pacific Railroad hosted one of the most spectacular railroad-themed opening credits ever done for a movie. The star is an SP passenger train in splashy “Daylight” dress led by a pair of equally classic “Black Widow” EMD F units.

Helicopter shots, distant shots, pacing shots were all added by associate producer Herman Hoffman after principal photography had ended. Test audiences had been unimpressed with the rather bland movie opening, so MGM rented a couple trainsets from Espee for filming on SP’s “Jawbone” line near Lone Pine, CA.

Once again, I am grateful to IMDb Trivia and particularly James Tiroch at Cinetrains for details about the railroad operations. The comments from Cinetrains/The Black Widow of Black Rock were extremely helpful in identifying the equipment used.

Let’s take a look at the zenith of Southern Pacific passenger cars led by silver-nosed freight engines as they barrel through the desert.